“Great singletrack riding on the north side of Red Mt. ”

This is the less popular alternative to the Sunnyside Trail, although the ride quality is awesome(!), especially when riding from east to west, even though a steep climb finishes the trail connection to Sunnyside at its western side. Given the shady environment, dark timber forest prevails, but a couple beautiful Aspen groves are encountered along the way. A portion of the trail allows for big views out and down to the Woody Creek valley, thousands of feet below.

This trail is most frequently ridden on the very eastern portion, using a short connector to meet up with the Sunnyside trail sooner than later. If you want to continue on Shadyside proper, you'll have to watch out for a wooden sign directing you to make a right turn (in the first Aspen grove that you encounter). From this point to the west, you'll encounter a really fun & fast descent that allows for whoops and hollers.

Halfway through the western portion of trail, watch out for a significant trail intersection. Shadyside is signed properly and continues to the left. If you take the intersection to the right, you'll likely descend downhill, end up in a private neighborhood, and may need to make a significant climb back up to this point.

Use this trail as part of a loop up and around Red Mountain, or as a partial alternative to any featured ride using the Sunnyside trail. 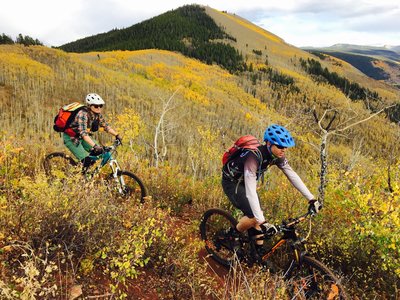 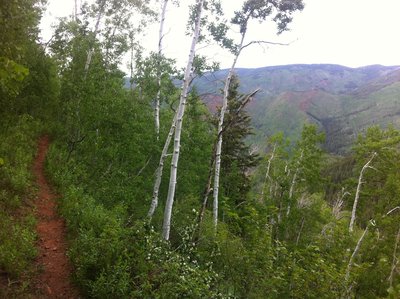