This is actually two very compact trail networks in Greenfield, MA, separated only by crossing Mountain Rd. They are known by a number of different names, including Highland, Rocky Mtn Park, Poet's Seat, Sachem Head and others. This 2 park loop takes in many of the most notable trails and includes the two lookout areas.

This ride is about 2/3 singletrack, although some of the singletrack is on the wide side. Most of it is technically fairly easy, but a few sections definitely rise to intermediate level and the climb up to Sachem's Head lookout in the first loop is very rocky and will require hike-a-bike in some sections for pretty much everyone - the view is worth it though!

The most flowy trail is the White diamond trail on the other side of Mountain Rd. The Red trail is also a favorite, hugging a steep dropoff for part of it, which requires some care if you end up with a dab or worse.

All-in-all, this is a great little set of trails, which with a small amount of connection on the road can include several other networks in the area (Deerfield Ridge, Sugarloaf North).

There are several areas where you can park, including at a local bike shop on High Street and at a parking area off Mountain Rd right between the two trail systems. This loop begins from another parking area around the corner from the tennis courts off Highland Avenue.

Out of the parking lot, you'll head up one of several double tracks that all wind up at the same place in short order. Follow the doubletrack for a little over half a mile, then taking a narrower trail to the right. This has a few little minor drops, perfect for the intermediate or advanced beginner rider. Not long after taking the right, you'll cross the power lines. There are offshoots as you go, but generally you want to stay right without hitting a road or dead end.

About 1.25 miles in, you recross the power lines. Now stay as far right as you can without recrossing them, hitting a couple of very short singletrack sections. Fairly soon you come back to some doubletrack and you turn right/downhill.

A little before two miles, take a left on a fairly steep rocky singletrack. It's a short distance until a four-way intersection, at which point you go left and continue your uphill slog on the doubletrack. Make sure you don't take any of the left hand trails with any notable downhills. It is extremely rocky in spots and you'll be walking your bike at points. But eventually you reach Sachem's head and the platform with a great view.

After that, return the way you came (the alternatative is a massively steep rocky descent where even carrying the bike is difficult). This descent gets more and more fun as you go down. Go straight through the four way intersection you had come from earlier, all the way down until you hit the paved road, which is Mountain Rd.

Go left and then almost an immediate right off mountain road into the Poet's Seat Tower parking lot. Head up the access road, which is a wide graded dirt road that is seasonally open to traffic. Your climb will be rewarded with an awesome view at the Poet's Seat Tower. Snap a few pictures and then continue straight - the access road loops around but you want to continue straight onto a trail which turns into a descent that is halfway between a single and doubletrack. If semi-technical descending and winding through trees is your thing, this will be your favorite section.

About half a mile down, bear right. If you miss it, you'll soon wind up at a dirt road which means you've gone too far and just need to backtrack a little bit. After bearing right, you'll reach another intersection with two blue dots and two red dots on the trees on the left. Keep going straight instead, and you are on the white diamond trail. This is the flowiest singletrack and is so fun that you won't mind doing it again in a few minutes. Take this trail as straight as possible, almost a mile, until you hit a very rutted dirt road.

From here you take a sharp left downhill. You are now on the red trail. It begins as doubletrack and turns into a singletrack perched on the edge of a sharp drop. Depending on the foliage season, you can make out the river down to your right. Use care here not to slide out off the trail and risk going down the slope. Eventually after a mile or so this trail winds up back at that intersection with the blue and red dots. Take a left and repeat the flowy white diamond trail.

This time, keep your eyes out after about 3/4 of a mile for a short steep singletrack bearing right. Take it and you're back at the Poet's Seat parking lot/access road. Your ride is almost done, you are going to basically retrace some of your steps. Cross Mountain road and head back into the trail the way you came. At the four way intersection, take the left hand trail rather than going up Sachem's head again. Take a right on the doubletrack and head uphill. If you simply stay on the doubletrack bearing right when an option, it will wind around the ridge and take you back to the parking area. 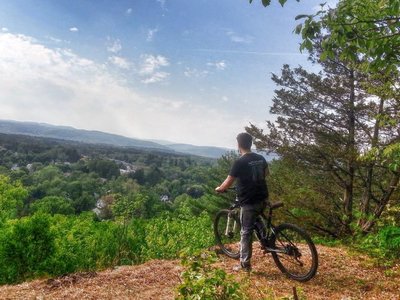 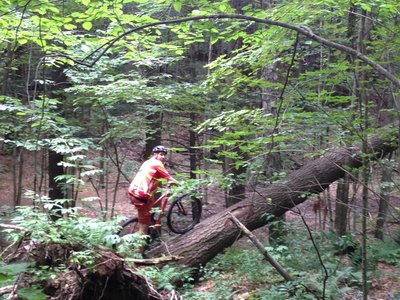 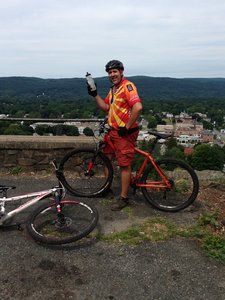 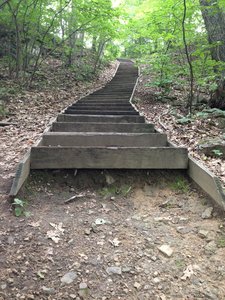 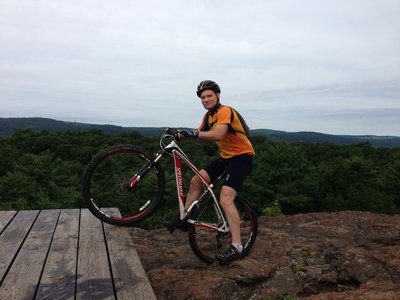 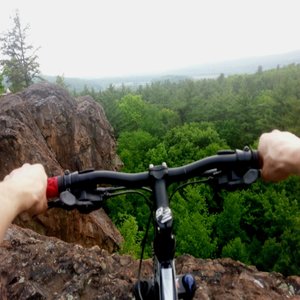