“Amazing riding on some of the best lower elevation trails that the American Valley has to offer. ”

The route starts from the Spanish Ridge trailhead, but if you're staying at Oakland Feather River Camp, it's just a short roll down the road. The creek is great to soak your tired feet after ripping some amazing singletrack!

The Monument Peak Trail as ridden here is a highlight, extremely fast, fun, and a really good rocky flow. Definitely a highlight of the ride!

The views will take your breath away. There are multiple viewpoints that highlight the Sierras that surround the American Valley. You'll be on singletrack for the majority of the ride, there is only one section that follow the Old Highway Rd. that leaves the Cascade Trail and connects to the Flume Trail.

There is no water on the route or at the trailhead. The South Park area is mostly (except for the Cascade Trail along Spanish Creek) on south-facing slopes, so it gets a LOT of sun. Temperatures during the summer can get quite uncomfortable. Fortunately, there are good swimming holes along Spanish Creek. Look for the very rocky section on the Cascade Trail II, there is also a bridge. That is a great place to stop and cool off in the water.

Starting from the Spanish Creek Trailhead, climb up Spanish Traverse Trail. The grade is steep at the beginning, and there are a few kicker switchbacks, but it mellows out and you'll traverse along the south edge of Spanish Ridge. Cross both intersections with the Spanish Ridge Trail (you'll get to ride them at the end of the ride, if you follow this route). A ride through the Oaks and Ponderosas will lead you to one of the big intersections on the ride. It is well marked; Spanish Ridge ends when it runs into Cascade Trail. Take a right to descend towards Spanish Creek on Cascade Trail II. You'll be returning to this intersection to finish up the ride, so you'll get to check out the other trails too!

Take a right, and descend on Cascade Trail. The first part follows an old 4x4 trail, and is pretty fast and open, but the lower half of the trail turns into loose rocks (mostly shale and slate) that are really fun to navigate, but good to check your speed. There are a few switchbacks that will sneak up on you if you aren't aware.

Once you make it onto Cascade Trail II, it is a fun and fast creekside trail that has a few rocky sections but has a really nice grade. A great place to stop is when you reach the Cascades themselves (you'll know them because there are a couple of bridges along the trail), there is a great swimming hole and it is a great place to see how the creek is eroding through the slate. Along the way, you'll pass multiple former prospecting pits and even an old mineshaft on your left (downstream of the cascades). There is a lot of history in this part of the trail; if you were to choose to, you might find the remains of one of the old Plumas County speakeasies that popped up during Prohibition!

Continue on the trail and you'll reach the trailhead. From here, you'll be on the access road with minimal traffic, also known as the Old Highway. A short climb will have you overlooking the new highway (70), and you'll follow the road down. Just before you reach the stop sign at the highway, look to your left and you'll see the trail marker for Flume Trail. Continue climbing on Flume trail and it will take you up to Monument Peak. One of the viewpoints along this trail, another good place to stop for pictures.

The descent on Monument Peak Trail is worth the entire length of the ride - such a fun descent! I don't want to ruin it for you, you'll just have to ride it. The trail eventually meets up with Cascade Trail, and you can continue on it back to the first major intersection you ran into. At this intersection, you can either return to your car via the Spanish Traverse Trail (or Spanish Ridge Trail)... or you can take a left and go up the Ridge/5 Peaks Trail. There is a short, steep climb up to one of the peaks, and you can take the Ridge Trail descent back to Cascade Trail II or Continue on the 5 Peak Trail, which takes you up a couple of climbs, and eventually drops down to Monument Peak Trail, so shorter or longer loops. Get back to Cascade Trail to return to the major intersection.

From here, if you follow this route, you'll have the second longest climb (but hardest one of the day) up to Spanish Ridge. It will take you to the most amazing views you'll have of South Park and the entire valley. It'll cost you sweat, and maybe tears, but they're worth it! Follow the trail, relax a the top, let the view sink in, and continue down the trail until it connects with the Traverse trail, at which point you'll be on cruise control back to the car, and maybe another dip in the creek!

This trail system is minutes away from Oakland Feather River Camp, which has existed in the area since the 1920s. The camp was originally run by the city's Parks and Recreation department and allowed working class families to spend time in the mountains, having everyone arrive by train. Families would stay in rustic cabins or tent-cabins and have 3 squares a day, and enjoy recreation programming for kids to adults. You can still stay at camp from mid-June through August. Prices are reasonable and the food is great. Really great opportunity to bring eh family along! A lot of fantastic riding from the camp! 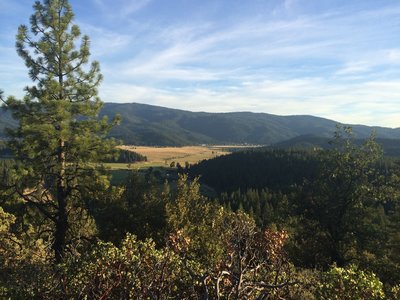 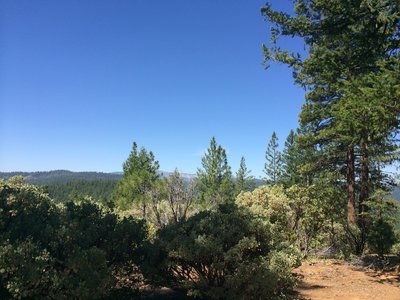 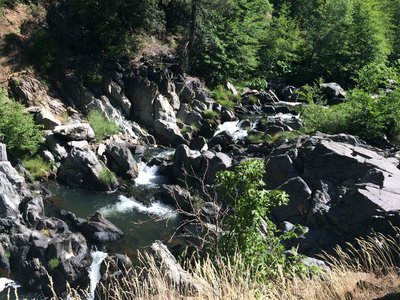 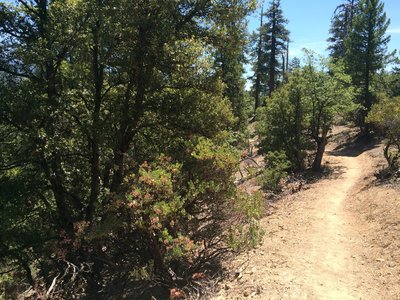