Mountain of the Rogue

“A unique Southern Oregon trail system; a multitude of experiences packed into one ride. ”

One of the Bureau of Land Management's "Backyard to Backcountry" treasures, this trail was developed between IMBA and the Medford, OR BLM office to provide world-class riding experiences.

Check out the top 20 BLM Backyard to Backcountry rides!

Mountain of the Rogue was built in the spring of 2015. It has a wide range of experiences packed into a small amount of trails.

The system features everything from narrow and exposed singletrack on steep grassy hillsides to fun and flow.

Mountain of the Rogue was constructed in the spring of 2015. There is a fenced parking lot off road, as well as a bathroom facility. Take care when accessing the trails from North River Road.

The entire mountain has poison oak throughout the trail corridor.

Mountain of the Rogue is a loop that starts with a big climb and ends with a multitude of gravity-fed, bike-optimized experiences.

From just inside the forest off N River Road, start the Mountain of the Rogue loop on Rat Pack , a steady and continuous climb. It climbs the west side of a long ridge to begin.

Eventually, the route rounds the southern edge of the ridge and then climbs to an intersection with a connector to Pay Dirt. Stay right to continue climbing along the backside of the ridge. From here, the grade has ramped up a bit and climbs through
a series of turns, bring you to the top of Breakdown. If you're tired and want to bail, go left here to descend.

Stay straight to continue the full Mountain of the Rogue loop. Through here there are short punchy climbs followed by steady grades. There is a seamless transition to Darkside, the final push to the top. This part of the ride climbs steeply into stands of madrone and pine around the east and north side of the mountain. The final push takes you to an amazing view south across the Rogue River Valley.

Nice work on the climb. Ready for a thrilling descent?

Arm Bar gets right into it heading out west and then wrapping back around the mountain to the north. The tread quickly narrows as the grassy hillside falls away steeply. The trail also becomes increasingly technical. Exposure is a key element here as you ride a tightrope across the hillside, navigating various sections of rock, including one major armored drop.

The upper challenge section is followed by a fast section down to a level section that turns into a stand of trees. From here, the trail changes direction and steaks back onto the hillside, through two major switchbacks. The upper one is tight and technical with some rocks, the lower one is steep and banked around a twisted oak tree.

Continue south from here through a long run of singletrack that intercept more sections of rock and oak trees.

The last part of Arm Bar travels through one extended stand of trees before hitting one last section of rock challenges. The last bit rolls out and around the south side of the mountain to the intersection with Breakdown.

The tread transitions to something slightly wider than Arm Bar and has a mix of challenging and playful elements.

To start, Breakdown rolls across the level from the intersection with Arm Bar and then tips downhill quickly through a series of steep rollers.

As the trail bends around the mountain to the north, the route drops through some rocky ledges flanked by small cliff bands on the hillside.

After the last drop, the next section of Breakdown dives into madrone trees and over a few thunder patches of trail that end at a small rock garden. From there the route makes a big left-hand turn and then follows a long continuous descent over deep rollers, through a mix of forest and open hillsides, to the top of Pay Dirt.

Pay Dirt is nothing but fun from top to bottom. With several sections of playful features like rollers and berms, this trail is awesome on its own or as an end to the Mountain of the Rogue loop.

From the intersection with Breakdown the finale of the ride starts out over a long of rolling trail to a left mellow turn, followed by a couple of tighter and quicker turns.

The middle part of Pay Dirt gets you in the flow with plenty of rollers and turns. Through here you'll experience the thrill of riding a roller-coaster on dirt.

The lower part of the route finishes strong with more rollers and berms, just enough to plant a huge grin on your face as you roll out to the bottom of the Mountain of the Rogue ride.

in Mountain of the Rogue

in Mountain of the Rogue 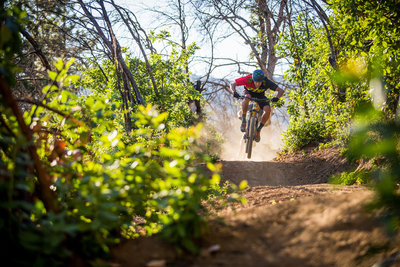 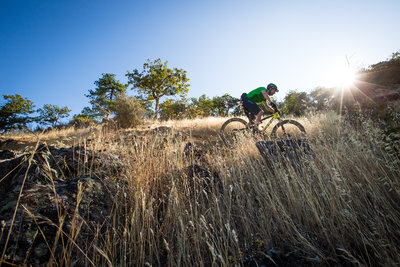 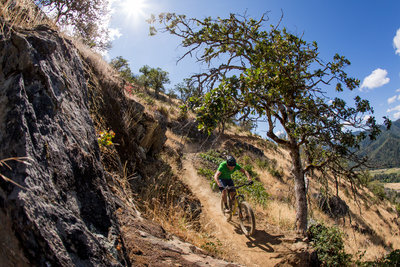 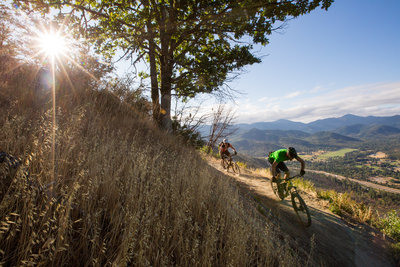 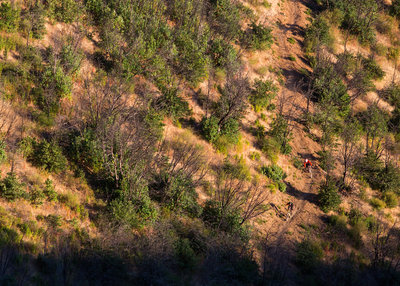 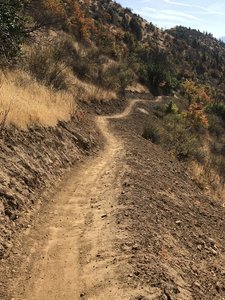 Sterling Mine Ditch Trail Out-and Back