“This gravel road passes by three forts built by the Italians to defend against the French, now on French territory. ”

The Italians built a large network of military roads along their mountainous borders with France, Switzerland, and Austria-Hungary (now Austria and Slovenia) during the time of the first world war. Many of these roads are now maintained for recreational pursuits.

The Les Trois Forts de Montagne (The Three Mountain Forts) trail runs from the Col de Tende past Fort Central (formerly Forte Colle Alto), Fort Tabourde (Forte Taborda), and terminating at Fort Pépin (Forte Pepino). The Col de Tende (Tende Pass) has been an important trade route since ancient times although a tunnel now runs beneath it. The Italians were anxious to defend it against invasion, but they lost and the forts are now all on French territory.

To access this trail, you'll have to drive literally up a ski run from Limone Piemonte via Panice Soprana on the Italian side. It's not the kind of thing you probably do everyday, but it's fully asphalted to the top and can be done in a normal car. There is a mountain hut (Chalet le Marmotte) and large parking area just below the Col de Tende. It is not recommended to drive up from the French side.

From the parking lot, take the branch to the right to travel about 1/2 mile to the actual Col de Tende where this trail begins.

From the pass, do not continue down the mountain (it is a long way back up!), but make a sharp left towards Fort Central. You can ride through/walk around the fort and its accompanying barracks and you'll enjoy an awesome view down into France. Once you've finished, continue on and the path will merge with the Strada ex-Militare Colle di Tenda (Former Tenda Pass Military Road) for about 0.3 miles which straddles the border at this point.

When you reach the fork at about 1.2 miles, keep to the right to begin the 100 m (340 ft) climb to the second fort, Fort Tabourde. Along this segment, you'll enjoy excellent views of the Vallée de la Roya (Roya Valley) and the 50 or so switchbacks for the old road through Tenda Pass from the French side.

After visiting Fort Taubourde, you'll climb again until 4.2 miles where there is a short respite as the trail follows the border again. Then it's another short 75 m (250 ft) climb over a half mile. Here the trail intersects the Cime du Bec singletrack. Save this for the return trip and instead continue along the road to visit Fort Pépin, which also offers commanding views of neighboring peaks and France below. 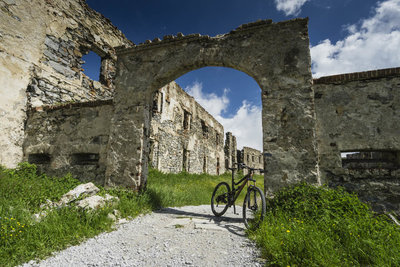 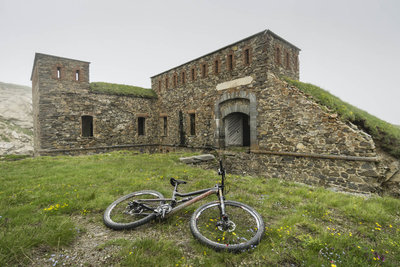 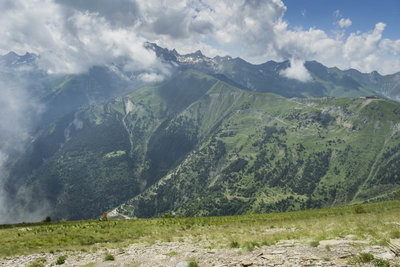 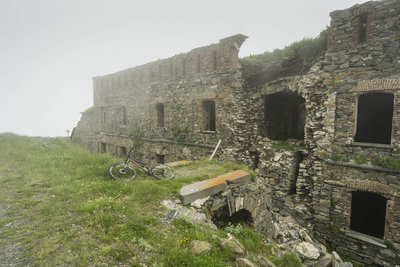