“A silky smooth out-and-back that leads to great views of Detroit Lake and Mt. Jefferson. ” Super fast, super smooth singletrack, with just enough well-placed root drops to keep you honest, Stahlman Point takes you high above the lake and the boating crowds for classic Oregon views of Mt. Jefferson and the North Santiam River.

In an area devoid of good, notable riding, Stahlman Point is worthy of your time, even if it's just a stop over on the way back from the McKenzie River Trail. Detroit Lake is the busiest lake in the state of Oregon. Most of the hordes are focused on drinking beer and wakeboarding on the reservoir, but on busy weekends, expect to encounter flip-flop clad hikers from the campgrounds across the street.

Being a fast, downhill trail that is primarily used for hiking, the potential flash point for hiker-biker conflict is high. If there's thirty cars at the trailhead, maybe save the ride for another day. You won't be able to savor the descent anyways. Bring a swimsuit for a post ride swim at the campground or, for the adrenaline junkies, continue down Blowout Road and send yourself off the pedestrian suspension bridge that hangs over the lake.

Start at the Stahlman Point trailhead on the south side of Detroit Lake. The trailhead lies right between Shady Cove and the South Shore Campgrounds on the lake. You'll have to ride this as an out-and-back; there are no roads or alternative ways to the summit.

From the start, the trail meanders through second growth Douglas Fir forest complete with the usual Oregon understory of Oregon Grape, Salal, and Sword Fern. The trail is steep, but never relentless. Short, steep sections give way to well-timed, leg-resting reprieves.

About halfway up the trail, you'll begin to catch views of Detroit Lake, Dome Rock, and French Creek Ridge through the forest. At 2,500', the trail turns southeast and enters a section of old-growth Douglas Fir forest. Shortly after ducking under an ancient, downed forest giant that hangs above the trail, you'll pass over an intermittent creek and resume climbing.

After the creek, the steepness levels off a bit and makes for an enjoyable climb as the views get better and better through the forest. Two more switchbacks and you'll be on top of Stahlman Point enjoying the views. The Point used to be a fire lookout for obvious reasons.

From the summit, soak in the 360-degree views of Detroit Lake, Coffin Mountain, French Creek Ridge, the North Santiam River, and, finally, Mt. Jefferson before cashing in on the downhill you just earned. It's almost sinful that this short of a climb leads to this good of views.

Being close to the busiest lake in the state of Oregon, the Point Trail sees its fair share of traffic, and thus, trail maintenance. You'll be thanking the Willamette National Forest trail crew for their work on the descent as it's silky smooth and fast. Peppered with just enough small root drops, rocks, and rollers, the trail will keep your attention until the bitter end. You'll just wish is was longer.

The Stahlman Point fire lookout was built in 1948 and removed in 1966. The foundation has since been removed, but the flat area where the lookout used to stand is a great place to sit and re-hydrate. 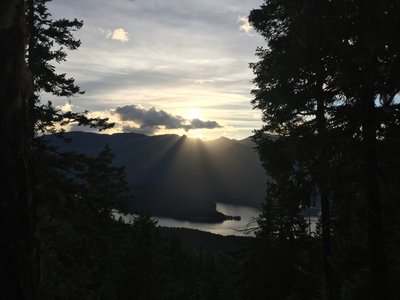 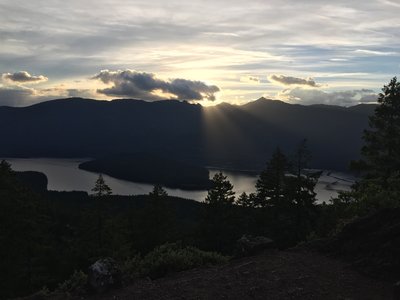 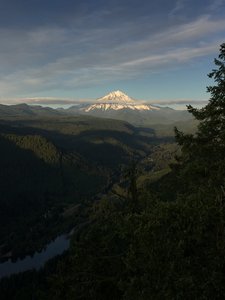 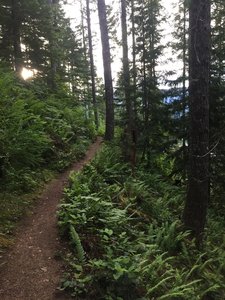