“A cross country loop for the Gods through olive groves overlooking the Gulf of Mirabello. ”

This cross country route features some awesome views of the Gulf of Mirabello on the northern coast of Crete as it meanders among ancient olive groves and piney woods in the arid landscape. There's an opportunity to have a bath in the gulf at the start and end of this ride in the outskirts of Agios Nikolaos. The route also passes a number of beautiful Greek Orthodox churches, including a couple small, isolated ones in the countryside.

While not technically demanding, the route climbs from sea level to 520 m (1,700 ft) so it does offer a bit of an aerobic challenge including a couple of sustained ascents/descents of more than 10% grade. But from the small village of Kroustas at the top, you've got an excellent view of the Gulf of Mirabello and the olive groves through which you've climbed. The village also offers a chance to sample some Greek coffee.

You'll definitely want a GPS or the MTB Project mobile app for this one as the route follows unnamed farm roads and virtually all of the intersections are unmarked, so it would be really easy to get lost amongst the olive groves.

There is a parking area near Almiros Beach in Agios Nikolaos if you are arriving by car. Head south along the beach and at the end of the beach you'll take the short singletrack section on Almiros Beach. Turn left on the busy coastal road for 0.3 km (0.2 mi) and then take the Agios Nikolaos - Mordati gravel road to the right (away from the shore). This climbs through piney scrubland to the outskirts of the village of Mardati. When you reach the new A90 road, take the tunnel under the road to continue to Mardati.

After you pass the village of Mardati (which consists of about 10 buildings), turn left onto a gravel road (Mardati Farms) that passes through the first of the endless olive groves you'll encounter along the route. You'll pass several farm roads (hopefully you heeded the earlier advice about the GPS) before you reach the Olive Garden farm road. Turn right to climb steeply for 0.6 km (0.4 mi) until you reach the Olive Grove farm road.

At this point, you've already climbed almost 250 m (820 ft). You'll get a chance to catch your breath on Olive Grove because it's initially flat before it descends a good way back to sea level. There are some great views of the Gulf of Mirabello on this stretch.

In the midst of this steep descent, before you reach the A90 road, watch for another farm road to the right: Olive Valley. Hopefully, you've brought your climbing legs. Olive Valley climbs over 5 km (3 mi) and includes a mile of 10% grade as you (presumably slowly) make your way to the paved Kroustas - Prina road. Several switchbacks make the climb more tolerable, but they are wide enough for farm traffic, so they won't require any technical skill. There are a couple of small chapels just off the road.

The one at 15.3 km (9.5 mi), Ekklisia Agios Ioannis (Chapel of St. John), makes a good place to stop for a rest as there is a nice shade tree and it occurs after the steepest part of the climb is over. After the church, resume the gravel climb until you reach the paved Kroustas - Prina road. Turn right and follow the paved road into Kroustas.

Kroustas is a decent-sized village with a beautiful Greek Orthodox church in the center. It's a good place to stop to sample the local coffee as it represents the highest point of the ride and most of the rest of the route is downhill. You'll make your way through the maze of narrow streets to a gravel road that descends, at times steeply, from Kroustas back to the farms surrounding Mardati. As soon as you leave Kroustas, a grand view opens up of the olive groves below with the Gulf of Mirabello in the background.

The route is lined with olive groves on both sides of the road. You've got almost two miles of moderate descent before a short climb. After the short climb, there is a steep descent (180 m/600 ft in 1.6 km/1mi) through several switchbacks. At the bottom of the descent at 25 km (15.5 mi), there is a four-way intersection near some ruins and you'll have to make a sharp right to continue on the route. The descent continues for another 2.5 km (1.5 mi) back to the Olive Grove farm road.

Turn right onto the Olive Grove trail and when you reach the Olive Garden trail turn left onto the stretch which you previously ascended. At the Mardati Farms road, continue straight on Olive Garden which takes you back to the new A90 road. This stretch of gravel is somewhat rougher than the proceeding ones, but nothing too difficult.

After crossing the bridge over the A90 road, follow the trail to the left which parallels the A90 to the intersection with the Agios Nikolaos - Mordati road. Then backtrack to the starting point.

The starting point is at the beach, so consider a dip in the Gulf of Mirabello. 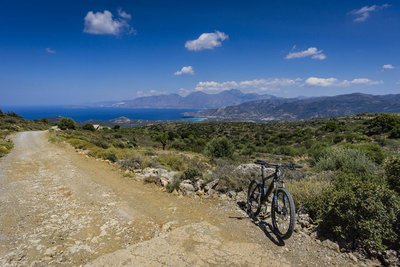 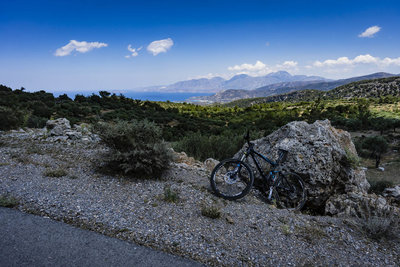 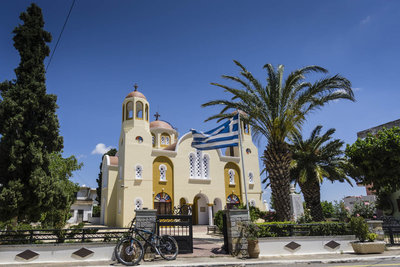