This ride features many of the best trails in Caprock Canyons State Park through the neighborhood of the Little Red River. You're likely to see some wildlife (prairie dogs and bison at least, but watch out for the big bad wolf, err coyote). You'll have the opportunity to ride on the rim of the canyon, up on the mesa, in and out of the Little Red River Valley, and among the beautiful red rock formations in the eastern portion of the park. The opportunity to ride in such a scenic environment should be savored.

However, many of the trails are 3-4 feet wide. The base is mostly hard packed sand/dirt and bison tracks, but there are some short and some extensive sandy stretches. Fat tires will be helpful.

Park (or stay) at the Honey Flats Camping Area. Here, you can't miss the prairie dog town. Head out on Canyon Rim Trail. This trail is 3-4 feet wide and has some short, sandy sections, but you'll experience that WOW moment a few hundred feet into the ride as you approach the canyon rim and the magnitude and majesty of the chasm suddenly becomes apparent.

Then you'll follow the rim for about 2.0 miles before a series of two short and steep descents take you down to Wild Horse Trail and a crossing of the Little Red River (it was pretty dry when I was there). The descents are rutted and filled with loose 2-4 inch rocks, so they don't fit with the easy character of the rest of the Canyon Rim Trail.

After joining Wild Horse Trail for 0.25 miles, turn right to begin the difficult climb up Mesa Trail. It's over soon though even if you have to walk, and there is some narrow but otherwise easy, flat, narrow singletrack on top of the mesa as the payoff. Mesa Trail runs close to the canyon rim although you wouldn't know it because there isn't much of a view. At the far end of Mesa Trail, take the Mesa Spur Trail over to Lower Canyon Trail - North. Mesa Spur Trail does have some great views near the edge of the cliff, but the descent to Lower Canyon Trail - North is quite steep and there are a couple of drops/chutes that all but the most advanced riders will probably have to walk.

Lower Canyon Trail - North runs through the valley of the North Prong of the Little Red River and is 3-4 feet wide its entire length. It crosses the normally dry river bed half a dozen times and the trail runs directly through the river bed for a couple hundred feet in a couple of places. Unfortunately, this trail is a beach. The short little ascents/descents down into the river bed are particularly sandy. Having said all that, I was about to ride about 90% of it with "normal" tires, but it was slow going with each pedal stroke being two steps forward and one step back. Fat tires that would help you float over the sand would make this a fun ride.

At about 7.5 miles, you'll leave the river bed and after a short climb, you'll crest a hill and an awesome view of the red rock canyons to the west opens up. The path also becomes less sandy at this point, so you can make better progress.

At the end of Lower Canyon Trail - North, turn left onto Canyon Loop Trail (the trail which goes straight is closed to bikes). Canyon Loop Trail is also 3-4 feet wide but it features a good, hard surface so you can pick up some speed. This trail passes closest to the impressive red rock canyon walls in the northeast corner of the park. At times, the trail twists in and out of these formations and there area a few short climb/descent combinations through various washes.

When you reach the trailhead for the Canyon Loop Trail, take the Lower Canyon Trail - South which is a narrower singletrack following the main park road. This trail plunges down into the wash for the South Prong of the Little Red River. The descent is steep and rocky with a side of ruts and loose surface. The steep climb out on the other side of the wash features loose surface with ruts and a side of rocks. Expect to walk one or both unless you're a strong, technical ride. At the top of the climb, you'll have to turn right to take a short path (another tricky descent) out to the main road. The Lower Canyon Trail actually continues to the left (east), but that part of the Lower Canyon Trail is closed to bikes.

Continue south on the main park road for a quarter mile and then turn right onto the Eagle Point Trail. Eagle Point Trail is another 3-4 foot wide trail, but there isn't the sand to be found on some of the other trails. This segment is overall relatively flat, except for a couple of steep descents/ascents into the several tributaries to the Little Red River that is crosses. At the end of Eagle Point Trail, turn left onto the park road to complete the loop.

Caprock Canyons State Park was once part of the JA Ranch owned by Charles Goodnight, which encompassed a large fraction of the panhandle. Palo Duro State Park, 50 miles as the crow flies to the northeast, was also part of the ranch at one time. Goodnight was instrumental in saving the bison from extinction and the descendants of the Goodnight bison herd now reside in Caprock Canyons as the Texas State Bison Herd. 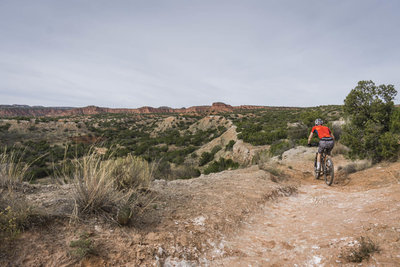 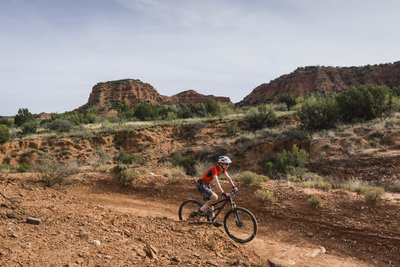 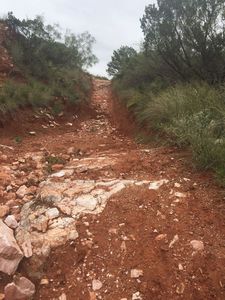 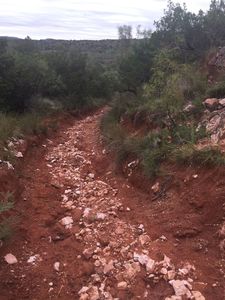