“An easy downhill from Dos del Sabion leads past a high alpine lake and several waterfalls. ”

For those who don't have the 3 days or the stamina to invest in one of the 130-170 km (80-105 mi) routes that circumnavigate the Dolomiti di Brenta massif, this short "loop" is a great way to experience some of the magnificent territory nestled in the valley of the Fiume Sacra (river) between the Dolomiti di Brenta massif (to the east) and the Gruppi dell'Adamello e della Presanella massifs (to the west).

The Fiume Sacra and its numerous tributaries drain the 3,000 m (10,000 ft) peaks of these three massifs. Much of the route passes through the Parco Naturale Adamello Brenta (Adamello Brenta Nature Park) which was established to protect the local landscapes.

The Telecabina Pinzolo (Bubble Lift) whisks you to the Dos del Sabion peak where you can enjoy the 360-degree views of the surrounding peaks. An easy forest road then takes you by a high alpine lake. A short detour on the way down takes you to a couple of waterfalls and a rifugio (mountain hut) with good food and refreshments. Then you follow lightly-trafficked roads back to Pinzolo.

There is plenty of parking at the Telecabina Pinzolo base in Pinzolo. The price for the lifts to the top was 10 Euros in 2017. You'll change from a bubble lift to a chairlift mid mountain. The lifts are generally open for summer from late June through mid-September.

Ten Euros (2017 prices) gets you from Pinzolo to the summit at Dos del Sabion (2,101 m; 6,893 ft). After enjoying the 360-degree views of the surrounding massifs and the val Sacra valley, take the Dos del Sabion singletrack off the backside of the mountain. This is by far the most (only) technical section of this ride. For 2 km (1.2 mi), the trail is a very narrow singletrack that descends steeply (230 m; 750 ft) along the trailbed cut into the steep cross slope. You'll pass through some scrubby trees and bushes that may graze your shins, but other than that it is pretty open and you can enjoy the views of the Dolomiti di Brenta just to the east (if you can take your eyes off the trail.)

The lake is situated in an open area from which you can also enjoy the surrounding peaks. Past the lake, the trail becomes a doubletrack and eventually a forest road. Just past the lake, the forest road reenters the dense forest. You'll descend 400 m (1,350 ft) over 5 km (3.1 mi) until the intersection with the Cascate di Valle Sinella forest road.

Turn right onto this unpaved forest road to climb 360 m (1,200 ft) over 3.2 km (2 mi) to reach the Rifugio Vallesinella mountain hut. Along the way, there are two waterfalls to explore: the Cascate di Sotto (Lower Falls) and the more impressive Cascate di Mezzo (Middle Falls). A third waterfall Cascate di Alto (Upper Falls) exists above the end of the Cascate di Valle Sinella forest road, but you'll have to walk 1 km (0.6 mi) and climb 150 m (500 ft) to visit it.

After visiting the falls and enjoying refreshments at the rifugio, return via the Cascate di Valle Sinella and continue straight at the intersection with Lago di val Agola. Shortly after the intersection, under the newer (2012) Pinzolo – Campiglio Express, the road is paved. The road continues until it merges with Strada Statale (State Highway) SS233 near Sant' Antonio di Mavignota. Turn left and after about 100 meters (yards) on the highway, the route leaves the highway to pass through Sant' Antonio di Mavignota.

At the far end of the village, take Via Ronch. Via Ronch descends continuously to Pinzolo following the Fiume Sacra (River) most of its length. The road becomes flatter after you cross the Sacra di Vallesinella at the point where it merges with the Fiume Sacra.

In Pinzolo, you follow the Ciclabile Pinzolo Bike Path for a short distance and then local roads take you back to the parking area for the Telecabina Pinzolo. 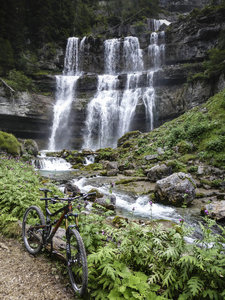 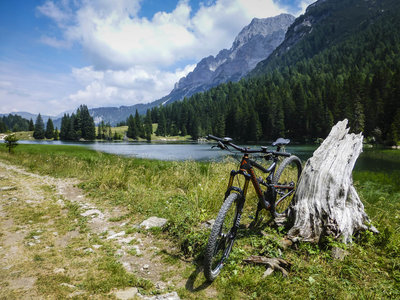 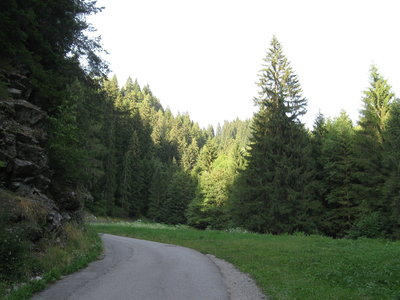 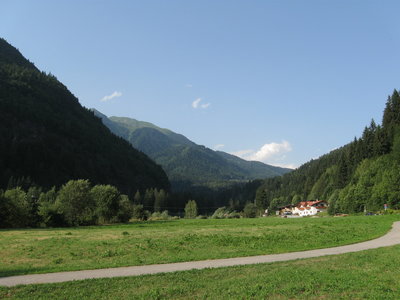