“Climb up to look down into Italy and Lago di Como and then scream back down to Mendrisio. ”

This is a good cross country route in Switzerland's Ticino region among the pre-Alps through the Valle di Muggio (Muggio Valley).

You'll ride up the val Breggia taking advantage of a number of a short singletrack and forest road sections to the top of the ridge that separates Italy and Switzerland in this area. The valley is nestled between Monte Generoso (1,704m/5,590ft) on the north and Monte Bisbino (1,325m/4,347 ft) on the south. Once you climb into Italy, you can see Lago di Como (lake). After another short singletrack, most of the descent is on a lightly-trafficked local road.

The route is well-marked with the red/yellow national Swiss MTB network signs as route 353. While the route connects a number of shorter singletracks and forest roads, there is a lot of road riding. But this is a good ride for the shoulder seasons when the stuff higher up is snowed in.

This route starts from a parking area on the outskirts of Mendrisio, but the official marked route starts at the train station in the center of town. The route winds its way through town to a quiet singletrack road which climbs among the vineyards to the first charming little village of the route, Corteglia.

After a short distance on quiet village roads, you'll reach the first singletrack section Parco delle Gole della Breggia. This is a short 1.3 km (0.8 mi) singletrack that crosses the gorge formed by the Breggia river. There is a washed out section of the trail that will require a short hike.

From Bruzella, the route follows the main cantonal road all the way to the next village of Cabbio with the exception of a short detour to use the old highway bridge over the Breggia. Starting at the bridge, another 300 m (1,000 ft) begins, but it is slightly less steep than the previous one. Cabbio is an old town with steep streets almost too narrow for a single car.

The climb continues in Cabbio on the Gaggio forest road. This earthen road climbs through a dense forest to the Gaggio chapel (which is no less spectacular than the several other small chapels you'll pass along the route) and then the road descends almost all the way back the Passo Bonello forest road just north of Cabbio. The route 353 signs direct you onto the Cabbio forest road so I've included it here, but for me this seemed like 200 m (660 ft) of extra climbing for no reason as you could also take Passo Bonello right out of Cabbio to avoid this extra climbing. You can make your own decision.

One way or another, you end up on Passo Bonello which climbs another 450 m (1,500 ft) from Cabbio to the pass. When you reach the farm just before the pass, turn left at the farm and then right shortly thereafter to continue climbing to the pass. The border is only about 0.2 km (0.1 mi) beyond the farm. It's marked only with an iron gate which was closed when I arrived, but it's possible to pass yourself and bike-sized objects through the gate.

After that, a quick 2 km (1.2 mi) descent takes you to the SP15 in Italy. Here, there's a big meadow overlooking Lago di Como (lake). On a nice weekend, you're likely to find the area covered in happy Italians having picnics and playing pickup games of football (soccer) and frisbee along with a number of food carts.

Turn left on the paved Strada Provinciale (provincial road) SP15 towards Erbonne. Erbonne is a tiny little village just on the Italian side of the border. Take the only path out of town to the south towards the border and shortly thereafter you'll cross a bridge over the Breggia which marks the border. The trail to Scudellate village is a bit technical in places but it eventually tames into a forest road. You'll pass the Cappella di Sant'Antonio along the way and you'll have intermittent views down the whole of the val Muggio (valley) with Monte Bisbino (1324m/4237ft) in the background. 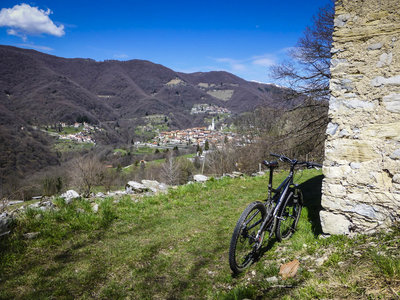 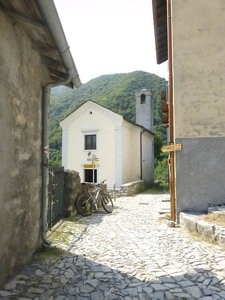 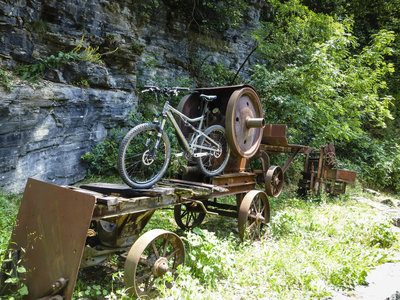 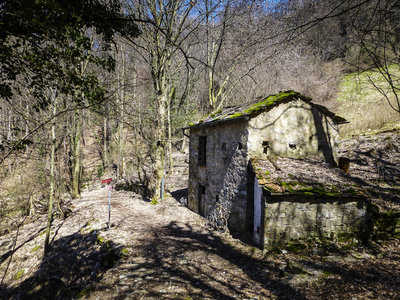