“A cliffside trail with many tunnels shares part of its length with a miniature train, not for the faint of heart. ”

The tracciolino is a one-of-a-kind experience. Here a narrow gauge railroad was blasted into the side of a cliff at an altitude of around 900 meters (3,000 ft). The route contains 22 tunnels and offers an eagle's eye view of Lago di Mezzola and Lago di Como below (at 200 m/650 ft).

WARNING: This is a cliffside trail, in many cases cut/blasted into the side of the rock face. The trail is generally wide enough to ride, but there are places where you'll die if you fall. There are railings and chains in some places, but these aren't high enough to save you and there are places lacking any fall protection.

While I didn't encounter it on the trail, one of the engines had clearly moved places while I was riding so the line is clearly not fully abandoned as advertised. The engines are however small and slow enough that it should be possible to move to the side if you happen to encounter one.

Some of the original line has been "abandoned" and some of the tracks have been removed, but you'll find the tracks run over the first part of the route which is generally about 2 meters (6 ft) wide. Here you can generally ride between or to the east (cliff is on the west side) of the tracks without any issue. This part of the ride also offers the best views of Lago di Como and Lago di Mezzola.

At 2.0 kilometers (1.2 mi), the trail diverges from the tracks into a 250 meters (820 ft) tunnel to the right. There are lights in the tunnel if you can find the switches. When you emerge from the other side, the trail is considerably narrower, in places no more than a few feet wide. In contrast to the previous section which is completely flat, fallen rocks make this section more technical adding to the difficulty. When the trail crosses the Torrente Valle del Revelas (creek), the trail is a bit washed out and you may have to carry the bike across the creek.

The trail eventually plunges into the small hamlet of Codera. There are a number of hiking trails that converge in Codera, but generally this route is done as an out-and-back, so you'll have to turn around and go back. The only road out of the village leads further up into the valley to the Rifugio Luigi Brasca.

The elevation profile shown for this trail doesn't take into account the tunnels and instead reflects the terrain above the tunnel. The trail is actually relatively flat until the final descent into Codera.

The tracciolino was built in the 1930's to ferry materials to the construction site of the diga Moledana (hydroelectric dam) which is near the start of this route. 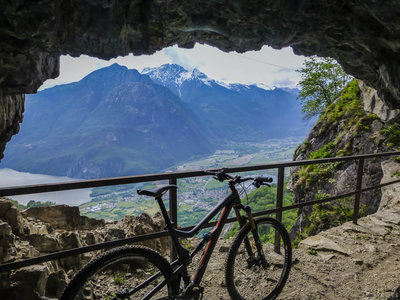 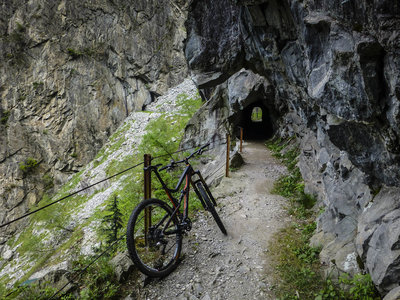 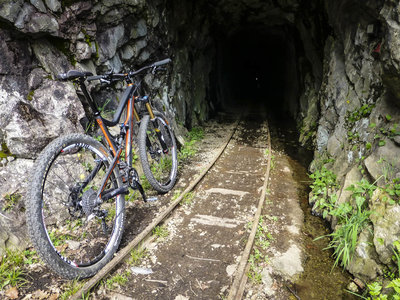