Family Friendly Between the campground and the bridge, East Weaver Creek Trail makes for a great out and back for families.

Like the short course, the long course begins in the 2014 burn scar, quickly ending where a prescribed burn stopped the wildfire. Here, oak woodlands begin to shade the path as you climb up to and travel along Howe Ditch. The ditch line, briefly interrupted by Jackass Ridge, turns into the Upper Howe Ditch, a transition zone between the oaks and the conifers. The course makes its way to Serenity, another ditch.

After crossing East Weaver Road at Butterfields, the climb up Musser Hill and to the course's highest point begins with Musser Trail. After 2.5 miles, the mostly singletrack climb gives way to Musser Hill Road, a seasonally closed Forest Service road, with commanding views of both the Weaver Basin and of Mt. Shasta.

LaGrange Ditch Trail, the race's namesake and one of the three gems of the course begins after a short descent on Musser Hill Road. Where the trail joins the ditch, look right to catch a glimpse of the Mud Tunnel as you race by. This three-mile section of ditch trail ends with a steep, switchback descent with plenty of loose dirt in the turns.

Use the bridge to cross East Weaver Creek and begin the descend on Day Ranch Trail, gem number two. Loop back around, through the East Weaver Campground, to climb back up along the creek to the bridge you used just moments ago. This time though, ride past the bridge to a wide spot in the creek and ride through to the start of the second big climb.

Once at the top of Jackass Ridge, the second highest point of the course, bomb down the mostly doubletrack descent, dropping 1,000 feet in about two miles, to the Howe Ditch. Cutting back across the basin, Howe Ditch will turn into Garden Gulch Spur, the third and final gem of the course. After which it is just a 1.5 miles to the finish from the end of Garden Gulch Spur.

The are a few creek crossings. Garden Gulch is crossed twice. East Weaver Creek is crossed once, although there are two other crossings with bridges. There are also two crossings on LaGrange Ditch.

This trail is managed in partnership with the Weaver Basin Trail Committee.

The start and finish are on Weaver Bally Road at 2,125 ft. a forest service road that is open year round. After only 0.1 miles, the singletrack begins.

At one mile from the start, is Garden Gulch. Expect some water in June in this rocky creek. There is no bridge, so pick your line across on the round river rock.

From the start of the race, the course is sun exposed, traversing a burn scar. At mile 1.5, the wildfire hit a prescribed burn and stopped. Now a short climb is set to begin as you enter the 10 Cent Gulch area, and its oak-filled shade.

10 Cent Gulch climbs up to Howe Ditch, 2.3 miles from the start. No, you are not imagining it. The oaks really are arching over the trail from both sides.

Now that you are on Howe Ditch, it's easy street. The hydraulic gold miners needed water. To get that water, they built miles of ditches. Howe Ditch is one such ditch line. One of many, moving water to the mines. There is no longer any water in this ditch. Just a gentle climb as you go, what would have been, upstream to Jackass Ridge.

Once on Jackass Ridge at mile 3.4, it will just be 100 feet on this closed road to the Upper Howe Ditch and back to singletrack. For the next 1.6 miles, watch out for trees and rocks that will want to clip a part of your bike. Notice the transition of oaks to conifers?

It won't last long because mile 5.1 is the start of the Serenity Ditch Spur, a short little downhill to Serenity Ditch, which does contain water for most of the year. If you happen to ride this section in late June or August, budget some time to pick a few blackberries.

Alas, all good things come to an end and Serenity Ditch ends at Rainbow. Hang a right and head downhill as the short and long courses part ways. At the bottom of the hill is East Weaver Road. Head straight across.

Just on the other side of East Weaver Road, six miles into the race, the first real climb begins at 2500 feet with Musser Hill Trail. At mile 8.4 (3,300 feet) the singletrack ends and the roads begin, with the climb ending at mile ten (3,800 feet).

After a brief descent on Musser Hill Road, turn off at mile 10.5 for LaGrange Ditch Trail. The trail meets the ditch at the Mud Tunnel, turning left away from the tunnel. The LaGrange Ditch is one of the three gems of the long course. This historic ditch still has some of the wooden trestles supporting the flume that is now gone. Race atop this ditch, fighting the rocks at times to keep your line. Watch out as the trail occasionally dips at places where the ditch has broken away. At the end of LaGrange Ditch (mile 13.5), is a steep, switchback descent to East Weaver Creek.

Cross over the creek at the bridge and merge back onto the short course to descend Day Ranch Trail, a sweet, flowy descent for two miles, the second gem of the long course.

At mile 16, the return to the bridge begins via the other side of the creek. The second real climb begins now at mile 16.5 (2,700 feet) along the East Weaver Creek Trail. Continue past the bridge as the trail crosses through the creek at a wide spot. The climbing continues until mile 19.5 (3,500 feet) when the 2-mile,1,000 feet descent of Jackass Ridge begins.

At mile 21.5, the Howe Ditch is revisited this time riding in the opposite direction as it carries you towards the Garden Gulch Spur. The Garden Gulch Spur is a 1-mile descent through the trees fed by the water flowing down the gulch much of the year. There are a few hard turns, but at its end (mile 25) is a hard right uphill turn towards Weaver Bally Road. Once at the road, it is a short descent to the final stretch of singletrack. Weaver Bally Road is your last best chance to pass. Once at the singletrack, you'll soon be on the whoop-de-doos that end at the finish line.

LaGrange has the most remnants for the California Gold Rush. If not racing, be sure to ride to its western end, just past the turn off for the switchback descent. There are still some parts of the old flume in addition to the wooden trestles at its eastern end.

The race starts in a burn scar from 2014 that was stopped when it hit a previous prescribed burn at mile 1.5. There is a kiosk along the trail that describes the wildfire and benefits of the prescribed burn. 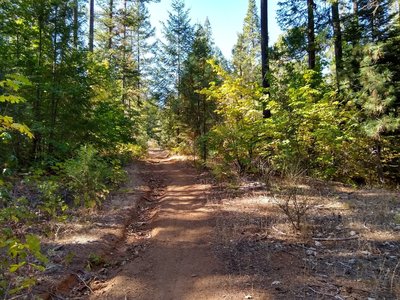 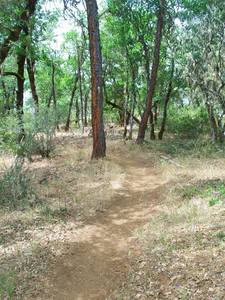 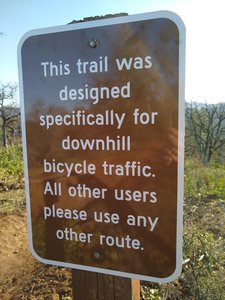 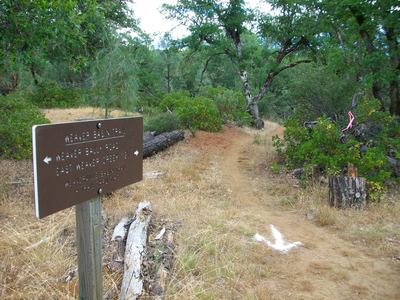