“Sample some of the best singletrack at Raccoon Mountain with an awesome five-mile downhill thriller to finish up. ”

Tesla's Revenge traverses some of the more challenging singletrack at Raccoon Mountain starting with a difficult climb and a finishing five-mile, grin-inducing, technical, and at times rocky descent. You'll enjoy great views of the Tennessee River as it passes through a large gorge 1,000 feet below you. This route also crosses the signature stone pathway inlaid into the dam along Megawatt.

Start out at the parking area on the Tennessee River. There's a boat launch, so if you're really doing it right, you can arrive by boat.

Take the Boat Ramp Connector across the road to get to the main trails. There's a pretty decent rock garden on this short trail which is otherwise flat. If you haven't enjoyed the rock garden, it's probably better to drive up top to enjoy some of the easier trails.

If the rock garden left you wanting more, turn right at the intersection onto High Voltage. The first two miles of High Voltage are relatively easy with wide turns and mostly gentle grades. About 2.8 miles into the loop, the last part of High Voltage becomes a grunt of a climb: steep, sustained, with tight switchbacks, and occasionally some exposure. There's only about a half mile of this before you reach easier riding at the top.

At the top of High Voltage, turn right onto the one-way Split Rock Trail. Split Rock is a relatively easy singletrack except for the namesake Split Rock, which you'll encounter very shortly after joining the trail. Taking the path to the right of the split in the rock leads to a two-foot rock drop; left features a one-foot roller; or walk if you are unsure.

Next up is Megawatt. Megawatt is one of the more technical trails at Raccoon Mountain featuring a lot of rocky areas and some challenging short climbs. One of the signature features of Raccoon Mountain is the stretch of trail along rocks that have been carefully inlaid into the dam. Megawatt also offers good views of the gorge. Megawatt comes to an end around the 8.4-mile mark after a particularly difficult and sustained climb. It's near the visitor center/observation deck which makes for a quiet and educational break if you need it.

The climbing continues for a short distance up to, along, and finally down Grindstone Ridge on Grindstone Ridge Trail. This is another intermediate trail with root and rock obstacles. The descent from the ridge is fun, featuring a number of switchbacks, but don't get carried away because you'll be looking for Small Intestine at the bottom.

Small Intestine has about a gazillion long flowing turns as it winds its way beneath the hardwood forest near the top of Raccoon Mountain. All the climbs and descents are very gentle and the turns are wide, so you can carry as much speed as you want through Small Intestine. The area is pretty open, so you'll be able to see oncoming traffic. Around the 13-mile mark, there is a large rock outcropping that offers an outstanding view of the river below if you missed your earlier chances.

Once you've left the Small Intestine, the easy Switch Yard takes you past the TVA's electrical switch yard beneath a tangle of power lines. At the end of Switch Yard, turn left on the gravel service road for about 0.2 miles to the top of Live Wire 1 and the beginning of your five-mile, 1,500-foot descent.

A power line service road has interrupted the first several hundred feet of Live Wire 1, so you'll have to watch for the singletrack segments that are intertwined with the road. Shortly enough, you enter the forest and the real fun begins: a screaming descent featuring a number of switchbacks and short bridges, with alternating flowy and rocky sections all woven neatly into the forest. The fun continues on Live Wire 2 until you reach Boat Ramp Connector.

Raccoon Mountain is owned by the Tennessee Valley Authority and operated as a pumped storage facility. The lake in the center of the mountain is formed by a large dam built from 1970 to 1978 and used essentially as a large battery. During periods of low power demand (i.e. nighttime) water is pumped from the Tennessee River near this parking area at the start of this ride. When power demand peaks (midday when everyone has the A/C blasting), the water is released through hydroelectric generators.

This allows for more consistent and efficient operation of nearby power plants, and in particular helps balance the irregular loads of finicky renewable power sources such as wind and solar.

The ride is named for Nikola Tesla who had a large role in the creation of the technology for AC power distribution systems. 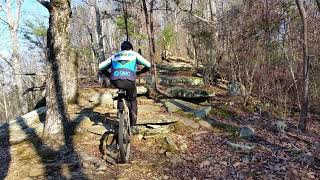 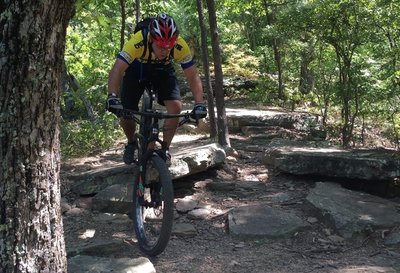 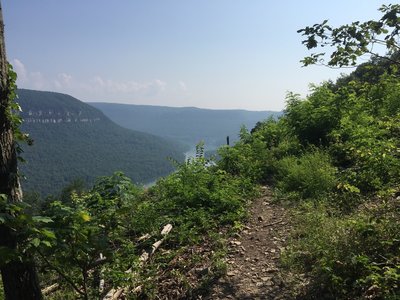 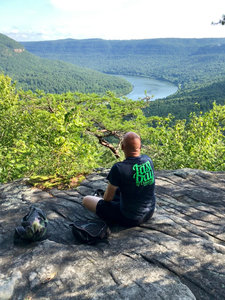 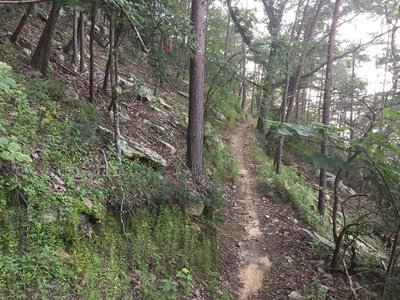 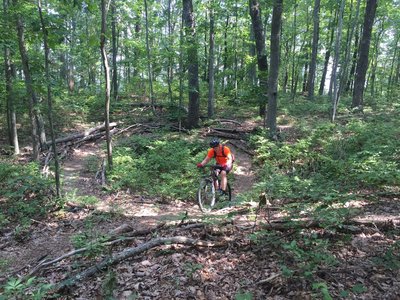