“Great climbing and greater descent with fantastic views of the Cote d'Azur. ”

This is a nice loop starting in the medieval city of Sospel featuring a long climb, great technical downhill singletrack, spectacular mountain and sea views, and some history. The long climb to the Col de Braus summit will challenge you aerobically and the long descent back to Sospel will challenge you technically. Along the loop, you can see well past Nice on the Cote d'Azur (20 miles away) as well as north 20 miles to the main ridge of the Alpes Maritimes separating Italy and France today.

Sospel is accessible by direct train from Nice, approximately 1 hr journey, about EUR 8. Bikes ride for free on the local TER trains so long as space is available.

If you've got the legs left, it is worth continuing up to the Ourvage du Barbonnet atop Mont Barbonnet before taking the second singletrack segment of GR510: Col de Braus to Sospel. This adds approximately 100 m (300 ft) additional climbing. It's a cool old fortification, part of the Maginot line that was supposed to make the border impregnable in 1940. There Mont Barbonnet dominates the local landscape, so there is a commanding view.

The route starts in the center of Sospel which is accessible by train from Nice. The route follows itinerary #5 and there were some signs along the route, but I would recommend downloading the GPX.

You'll start out west for about 2 km (1.2 mi) along the provincial road D2566 towards Moulinet. At this point, turn left into a small agricultural community onto the Col de Braus climb. The buildings quickly give way to forest and relaxing but consistent 6% climb up to the Col de Braus pass (1002 m; 3287 ft). Once you enter the forest, it seems like you be 1000 miles from nowhere. There are about 20 switchbacks along the way to keep the grade manageable and then, just at the pass, it levels off for a bit.

The pass features the crumbling ruins of a former border post on the old Franco-Italian border. The "new" border dating from post World War II is about 8 km (5 mi) to the east.

At the pass, turn left onto the paved road for a and then just past ruins, right onto GR510: Col de Braus to Sospel. This starts as a very gentle climb and after about 1 km (0.6 mi), take the Tete de la Lavina Spur (forest road) out to a prominence where there is a great view down into Sospel along the la Bevera valley with the Alpes Maritimes in the background. Return to the GR510: Col de Braus to Sospel and continue to the next major intersection, la Bassie du Pape at the 17.2 km (10.7 mi) mark.

The Cime du Farguet loop returns you to the la Basse du Pape intersection. This time, take the singletrack to the east, following GR510: Col de Braus to Sospel. The first singletrack segment is 2 km (1.2 mi) of a narrow, steep affair down to the D2204 provincial road through the forest and scrubby brush.

Then you follow paved roads for some time, gaining a little bit more altitude for the next descent. In the third hairpin turn along the road up to the Ourvage du Barbonnet fort, a second singletrack segment begins another narrow, steep descent most of the way back to Sospel. Just before you reach Sospel at the end of the second singletrack, you'll pass near another old fort, the Ourvage de Saint-Roch.

Then you weave your way through the old medieval center of Sospel, back to the start.

Sospel has historically been a border region with control passing between various factions to the east and west over the past millennium. The most recent change was in the Treaty of Paris in 1947 which moved the three localities just to the east of Sospel from Italy to France. Because of this, there are a number of old border fortifications in the area. \The route passes by a former border post at the Col de Braus and by the two forts: Ourvage du Brabonnet and Ourvage de Saint-Roch.

The cathedral in the central square of Sospel is impressive and worth a short visit and the bridge over the la Bevera river dates from the 13th Century. 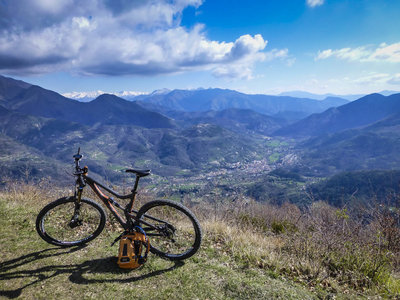 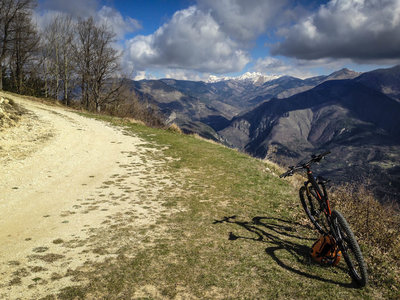