“A pleasant spin on fire roads and some challenging singletrack, with great views and a remarkable living abbey. ”

This area, like much of the south of France, closes for fire danger in the summer. Get info at ancien.paca.gouv.fr/files/m….

There are many possible routes on fire road and trails in this small massif. The mapped loop starts and ends at the abbey to give you plenty of time to check the place out and buy the monk's Frigolet liqueur without having to ride the rest of the way with a fragile glass bottle in your pack!

But if you are coming from Beaucaire or Tarascon, just ride the bike lane on the roughly 3-miles of N-570 road to the first point that you can jump into the loop (there's a railroad underpass here--you can also car shuttle to here, or to the point where the trail joins the rail line for the first time, further along the highway).

This option is actually a better ride that lets you hit a boulangerie in one of the towns, warm up on the road, spot the abbey in a startling way, and finish the ride with a challenging downhill and an easy roll back to the start.

Water and WC available in Boulbon and at the abbey. Though you could ride this loop in the other direction, don't. Going up the singletracks and down the fire roads is a waste.

Ride through the abbey to the upper parking lot, then follow the yellow trail markers onto the hillside to the SW. If you get suckered into the greensward, follow it to the end, but don't drop down the dirt roads at the far side. Look for a narrow and scratchy singletrack on the right and follow it uphill toward the rim of the depression where the abbey sits.

When you reach the rim, don't follow the obvious, straight track down into the adjacent watershed. Go left and follow the yellow markers along the ridge and over a rocky bump. The trail now drops along a steep spine and becomes severely eroded before reaching a dry wash. Continue down the wash over limestone steps and slabs until you reach an olive orchard. Soon, you'll see the railroad. Turn right and follow dirt roads beside the rail line. You'll cross under the tracks, then back again shortly before bending right to head uphill on fire road.

Stick to the main road as you climb gradually up toward the crest. This never gets too grueling but there are lots of roads, so watch for occasional signs for San Salvador and Abbaye Saint Michel de Frigolet. Reaching the top enjoy the views and the breeze, and follow the crest of the massif past a radio tower and San Salvador peak.

Arriving at a crossroads, you drop down to the left on a narrowing singletrack that starts out smooth, then becomes another difficult (but fun!) limestone wash before dumping you out near the Boulbon castle. Continue down into the village, bear right, and climb up paved switchbacks beside the town cemetery. At a fork after a steep dirt section, you can divert right on an out-and-back to visit the Bonnet Mill.

Continue upward until you reach the crossroads again, then go left. You'll occasionally be diverted onto short singletrack segments: follow the yellow markers and continue toward the abbey and the end of your ride.

Founded around 960, the original monastery expanded over the centuries until it became a major pilgrimage site. But the French Revolution put an end to all that, and the property was sold off. In 1923, it began operating again and has continued ever since. 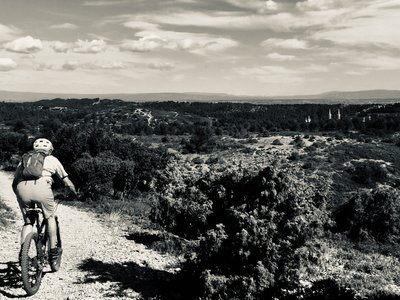 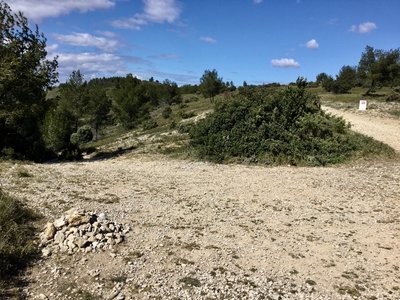 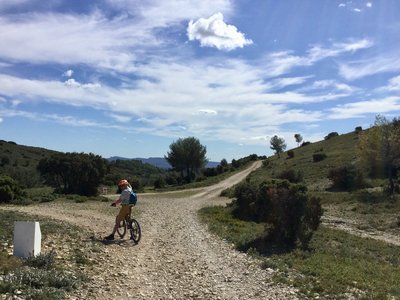 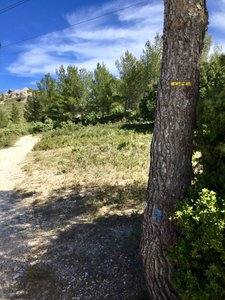