“Beautiful landscapes in a wild environment, including some stout climbs and challenging singletrack sections. ”

Like most shrub and forest in the south of France, Les Alpilles can close due to fire danger in the summer.

Varied riding with a few steep climbs; technical descents stitching together sections of good singletrack; panoramas to take your breath away.

There's lots to do here after your ride, too: visit Glanum archaeological site or the citadel of Les Baux; explore the narrow streets of Saint-Rémy-de-Provence, where Van Gogh stayed at the asylum and painted many of his most famous works; hike the ladders, cables and arches of Mont Gaussier or climb on its famous walls (if you brought a rope and rack).

A GPS or the MTB Project mobile app are helpful to connect this intricate loop. Check the individual trail segments for coordinates of trailheads. There are many more roads and singletracks in this area than are mapped. Feel free to explore--maybe you can extend the ride and link in more singletrack!

Garrigue vegetation is spiny and limestone cobble can be sharp--protective clothing is helpful for the more difficult, narrower sections.

Sadly, there's no swimming (nor dogs!) allowed in the lake: it's the drinking water supply for Saint-Rémy-de-Provence.

From the old Jewish cemetery, follow a small road south and uphill toward the Peiroou Lake. Where the road starts to drop, bear left and follow one of several trails down to the lake.

From the lake, find the GR6 and follow it due south and uphill, past the Mas de Gros (farm). Once on the crest, go west toward Les Baux-de-Provence on a track that climbs gently, then begins to descend. In short order, watch for a cairn on your left marking the entrance to Les Lombards trail. Take this smooth trail through a steep start until it joins a track. Continue to descend for about 100m, then turn left (east) to reach the D5.

Climb this paved road for about 500m, then continue on a small road on the right that climbs up to the Caume communications tower. Cross the tower site and continue up on a rocky track until you rejoin the road where it forms a hairpin turn.

Once back on the Caume road, the Mont Gaussier: West Side trail heads left if you want to complete a shorter loop. If not, continue for a total of about 50m and take a left onto the Petit Balcon Sud. Ride/push through a steep start up to a point at 302m. Ride the singletrack south to meet the Baume Brignolle road and head east to a point at 321m, where you'll find a cairn on the left marking the start of the Sentier de Pierredon.

This is an out-and-back option that heads east, joins Les Crêtes de la Caume trail, then bends back west and onto the plateau above and north of the cairn intersection for great views.

Back at the cairn, continue SW along the crest, using short singletracks to cut off two hairpin turns in the fire road. After 300m, take the track climbing right to continue following the crest west. At another cairn, the track narrows to singletrack. This is Les Grands Calans, a joyful trail with stair-step ledges, a balcony section, two short climbs, and a narrow, rocky finish. The singletrack ends at an olive orchard.

Take a track north to reach the D5 again where you reached it earlier. Cross the paved road and bear right on a path leading to the track going uphill and roughly NW back to Les Lombards trail where you came from. Here, you can either take this trail again (in the opposite direction from the first time), or take the fire road. Both lead to the crest and the GR6. Cross it and sniff out a singletrack that follows the crest.

Go east and follow some combination of the Piste des Lombards to Lac de Peiroou and La Verdière back toward the Lake. Retrace your approach on the road, or look for yellow-marked trails to return you to the parking lot.

You park near the Glanum archaeology site, a roman town that was founded off the Via Domitia--the first road in roman Gaul. But that road was ancient even then: from the crest of this ride, you can see this route, where the Carthaginian Hannibal marched his army--including the 37 famous elephants--across the Rhone at Beaucaire/Tarascon in 218 BC on his way to cross the Alps and attack Rome during the Punic Wars. 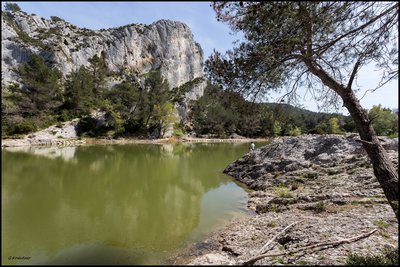