Family Friendly Do an out-and-back from Ste.-Marie-de-la-Mer on flat, smooth, wide tracks, with wildlife, great beaches, and seafood lunch options in town. Good tourist attractions in the area.

Don't try to ride here when the Mistral is blowing hard!

Consider starting and ending well away from the beach during busy summer months to avoid traffic congestion and parking hassles, which can be severe near town.

The Camargue is a famous bird-watching location, and the beaches you ride near are some of the wildest in France. Saintes-Maries-de-la-Mer is known for great seafood. This route takes you past or near additional interesting side diversions that include: Domaine de Méjanes Paul Ricard, Parc ornithologique Pont du Gau, Camargue Museum, Gachole lighthouse, a Michelin-starred garden restaurant, and horseback-riding. Don't rush—spend some time in the area.

Though the route sticks mostly to dirt tracks as mapped, there is a short stretch of striped bike lane on the D85A north of Ste.-Marie-de-la-Mer. Watch for big Nutria in the canal! You can also stay on the road to detour through this quaint seaside town and along the waterfront on paved bike/pedestrian path.

But if you want to link this ride into a roughly 40-mile loop around the Etang de Vaccare, there are some lengthy paved stretches on small, quiet roads required. I haven't mapped those, because they will be fairly obvious and hard to avoid if you go looking. For a shorter day on dirt paths, only, ride out and back from Saintes-Maries-de-la-Mer along the coast. Or park north of town and ride out and back to Domaine de Méjanes on wide dirt tracks.

The Camargue is home to wild white horses and black bulls that evolved here, rather than being introduced. Some of these wild animals are managed on manades (ranches), and the bulls are used in the wildly popular local style of bull-fighting that involves snatching prizes from their horns rather than killing the animals.

Start at the Domaine de Méjanes and ride south on the scenic Five Gorges designated bikeway until you reach a parking area at the D85A. Turn left and follow striped bike lane toward Saintes-Maries-de-la-Mer. Either pedal around the village on dirt as mapped, or detour through this scenic beach town on the road. Take the gravel sea dike heading east (Digue a la Mer). Pass the Gachole lighthouse, and continue to the south end of the Clos de Desclaux pond.

From here, either turn around, or if you want to close the loop on quiet pavement, turn left at the T, and follow the Chemin du Fangassier to the paved Route de Fielouse (D36B). Go left, past Salin de Badon and continue working north, visiting the east shores of Étang du Fournelet and the much larger Étang de Vaccarès until you reach the D37 on the north shore of Étang de Vaccarès. Turn left and continue west on this road all the way to the left turn back to Domaine de Méjanes.

Remember that this area is one big swamp. If you decide to pioneer a new route on the network of dirt tracks and dykes, be conscious of the mesh of canals that can be difficult to cross without swimming or wading. Also, pay attention to fences, gates and signs protecting private property and bird breeding grounds. Equestrian trails can be very muddy and may or may not be open to bicycles: seek local information before heading down them. 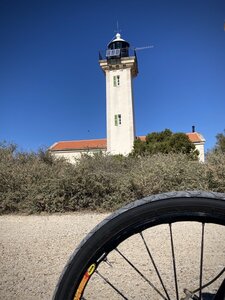 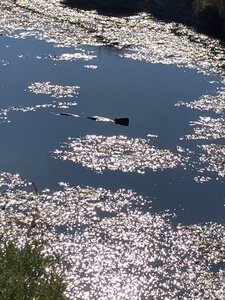 Oct 8, 2021
F Felix
Beautiful place! The wind is hard to hide from out here. Careful on the sand drifts near the beaches.