“A tour of the left bank of the Gardon River, past ancient monuments, and through a wild natural landscape. ”

Family Friendly Some sections of this long ride are great for families, with opportunities for historic site visits and lovely beaches on the Gardon River.

Fire danger can close the area in summer, and blazing summer sun will make parts of this ride undesirable.

High water can inundate or damage the path along the river corridor.

This is a popular recreation area with hikers, rock climbers, boaters, beach goers, and other tourists. Careful on the blind corners! Parking can be challenging in the easiest access areas, so come early or pick a quieter time to visit. Or choose more remote parking.

Over paved roads, dirt fire road and singletrack, this long route tours the natural area and historic sites along the north bank of the scenic Gardon River gorges, visiting four bridges along the way and swimming holes on the return trip. Perfect!

To keep it simple, you'll largely follow the Grande Randonnée 6: Ners to Aureille out, eventually leaving it to wander a bit to reach Russan/Sainte-Anastasie to tag your last bridge. For variety, take alternate tracks and follow the river shoreline back as mapped.

But feel free to mix it up as you see fit--there are lots of fire roads and singletracks in this narrow natural area, and it would be hard to get truly lost for very long: you are never far from the river (to the south), or the inhabited plain (to the north). A compass might be helpful, or just keep a careful eye on the sun angle and bring the MTB Project mobile app.

A note about parking! Recently (2018-19), the Pont du Gard management has taken a broader view of the region and begun to improve scabby road shoulders and pedestrian and bike access within a considerable distance of the Pont. This includes locking down random (formerly hidden) parking spots on both shores of the river.

This means that the area at the start of this ride as mapped is now gated and can no longer be accessed by private cars. You'll have to go further afield to park--perhaps the village of Vers-Pont-du-Gard to the north. Or, start and end your ride further along the loop, perhaps at Collias. Or, just bite the bullet and pay for official parking on either river bank near the Pont du Gard.

Along some of the narrow tracks in the garrigue shrub and over the carved bedrock and sand along the river, the riding is often challenging rather than flowy. These are not gentle miles. Fortunately, there are many shorter variations to be made of this ride.

Watch for the white-over-red stripes that mark the Grande Randonnée 6: Ners to Aureille. There are also yellow trail signs at many intersections (but not all). Bringing a hiking map of Les Gorges du Gardon will help make sense of the local place names on the signs.

Grotte de la Baume is locked to support protected bats during their vulnerable hibernation and reproduction periods between Nov 15-March 15, and May 1-August 15 (you can still visit the Hermitage and the mill ruins).

There is good rock climbing and a Via Ferrata on the cliffs you ride above and beneath. Hard stuff at Russan, easier routes at Collias. This is a popular boating stretch, so you can also rent a canoe or kayak at many locations in Collias.

The trail starts from the D-981, off a roundabout northwest of the parking for the Pont du Gard museum (the left bank lot). You begin by heading briefly east on a dirt road then taking the first right to find the ruins of the ancient Aqueduc de Nîmes. Follow these generally southeast then south toward Pont du Gard until you reach the Grande Randonnée 6: Ners to Aureille. Take a right on this trail and follow the GR6 past the 11th-century Chapel Saint-Pierre. Continue on toward the Pont Joliclerc, a popular canoeing launch and trailhead parking area. Turn right at the bridge to continue along the GR6 through Collias.

If you'd rather skip the majority of the pavement on this ride (and the Pont du Gard), start on the far side of Collias instead.

On the other side of Collias, the GR6 now turns south to leave the paved road, towns and farms behind for a while, climbing up into the scrub of the crest and turning right (west) to parallel the river. The rough track that goes straight at the bend will take you down to the river if you want a shorter day (probably hike-a-bike part of the way). Most of the other trails leaving the main route on your left-hand side in this next section are short and will lead out to a viewpoint over the cliffs to the river. Try one, then return the same way.

After you cross the Sanilhac to Gardon trail, keep an eye out along the side of the track for the stubby remains of an ancient Menhir or Standing Stone (Pierre Plantée), which predates the Roman arrival in Gaul and may be as much as 6 to 7-thousand years old.

Continue following the GR6 as it drops back down to the north and turns left to run along the edge of farm fields again. The route makes a wide arc northward to clear a bend in the river that breaks through the hills here. Once around the river bend, stay on the paved road for a short way to visit le Pont et le Prieuré Saint-Nicolas de Campagnac, a Knights Templar property that guarded the supply route to Jerusalem via their port at St. Gilles on the Rhone River delta.

After visiting the bridge and monastery, backtrack a bit to rejoin the GR6 that now takes you back into the scrub paralleling the river. You'll soon come to an intersection where the GR6 turns right (northwest). At this point, stay left. You can visit a short out-and-back to a viewpoint if you like, then continue following the track generally west, and along the line of the river. Eventually, you'll work your way down and out of the garrigue (scrub) to visit your last bridge at Sainte-Anastasie.

From here, you can retrace your tracks, of course, but it's more interesting to see new terrain on a roughly parallel route like the one mapped. Then, when you reach the Sanilhac to Gardon trail again, turn right onto it and descend through switchbacks to the river. Follow the rough track, bedrock ledges and sand along the left bank all the way back to Pont Joliclerc at Collias. You may want to take a swim at one of the river beaches in this stretch, or have lunch or a cool aperitif at l'Enclos, a casual, shady patio restaurant overlooking the river. Strangely, this type of place is rare in this area.

Back on the bike, from the Pont Joliclerc get back on the GR6 just long enough to cross over l'Alzon--a tributary that joins the Gardon just below the Joliclerc bridge. Round a hillock, then head back to the river shore for a while until it rejoins the GR6 again. Follow this all the way to Pont du Gard this time, and pedal over this World Heritage Site monument. There are a couple of lovely patio restaurants downstream on the right bank near an obvious Cro-Magnon cave. Stop in here to contemplate the view of the Pont during a post-ride beer and snack. Or, there's also a big meadow and open shoreline here for a nap, swim, or picnic with a view.

When you are ready, reverse your track across the bridge and find your way back up the ruined aqueduct to the start.

You may want to build in time to check out these interesting historic sites along the route: the Aqueduc de Nîmes, the 11th century Chapel Saint Pierre, the stump of a pre-historic Standing Stone, Pont Saint-Nicolas de Campagnac and its monastery, Hermitage and Grotte de la Baume Saint Vérédème (bring a headlamp!), two mill ruins, the iconic Pont du Gard, and a Cro-Magnon cave. 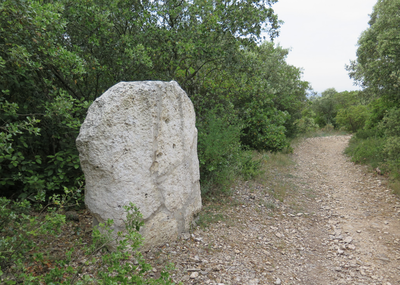