Joaquin Down, Up, and Out (auto free)

This is a point-to-point ride made possible by the Bay Area's awesome mix of parks and rapid transit. Hard to believe from the map but 40% of this ride is singletrack. Road miles are straight and fast while mountain miles are slower and winding.

This ride climbs to the crest on a mix of dirt and pavement takes one of many possible routes through the East Bay's singletrack mecca: Joaquin Miller Park. By climbing pavement, the route through the park is almost all hops, twists, and turns down. The fun per elevation drop is extended considerably by descending to the plain through Dimond Canyon. The ride generally progresses from really technical drops on rock to technical flow.

It's a hard ride to rate because of the inclusion of Chaparral Trail. And while Old Cañon Trail is intermediate in terms of slope and technicality (except the switchbacks at its east end), it has substantial exposure in places. Both of these can be readily avoided. The best alternative to the first is Cinderella Trail. Alternatives for the second are walking the exposed sections and tighter switchbacks, or skipping the canyon altogether in favor of Lincoln Avenue.

If you ride here, you have the BTCEB to thank in large part. Its volunteers maintain these trails including some reroutes for sustainability. Having been riding in the area for decades, it is a remarkable feeling to ride trails you helped build and maintain. Consider joining the organization.

The ride opening from Rockridge BART takes in the bit of dirt behind the North Oakland Recreation Center on the climb to the crest. There is additional, mildly entertaining, social singletrack for the taking along bits of Skyline between where the mapped dirt tops out and the intersection with Grizzly Peak. This opening can be swapped with the opening of the Oakland Crest Sidewinder ride. It is about the same distance but more challenging for climbing some steep dirt and climbing higher than the opening of that other ride.

After cresting on Skyline, the ride is fast to the Skyline Gate of Redwood Regional Park. Jump on West Ridge Trail for the relatively flat curving fire road prelude. The ride connects over to Joaquin starting at the Moon Gate. Almost all singletrack from here for the next nine miles.

Too many forks to bother with describing here. Part of the fun of Joaquin is getting lost and found rather than constantly checking (or worse, listening to) GPS. Makes it a playground to which to return again and again exploring something more and different each time.

There is a short loop in the middle that can be skipped to eliminate a touch of climbing and going over some of the same ground twice. It consists of Orchard Trail, the western portion of Big Trees Trail, and a bit of Sequoia Bayview Trail. It is included because in keeping with the theme of the ride as western Big Trees Trail is a nice drop and, particularly, one steep rock face.

After bottoming out the last flow on Bishops Walk, the ride takes a short pavement break on Joaquin Miller Road, then Mountain Boulevard. Look for the crosswalk near the bottom, cut left, and shoot the tunnel. Sight lines at the other end are limited so be prepared to stop to look for motorists. Cross Monterey Boulevard to Bridgeview Trail. Sidewalk for a short distance, then a gravel path, then drops left to a series of stairs down to a cement overcrossing of the creek. Staired switchbacks up the other side mean a lot of hike-a-bike.

From the top, a quick roll with a few surprises to the east end of Old Cañon Trail. The entrance is signed but because it is a singletrack that drops from the downhill edge of the fire road back toward you it is easy to blow by. If you do, no big deal. Bridgeview Trail ends soon enough at which point you realize you missed the fork and ride back.

Many of the switchbacks on Old Cañon Trail are too tight for most to take, particularly given the exposure on this steep canyon wall. So stay safe and dab generously. The roller to the creek crossing after the final switchback is particularly fun for narrowly hanging on the hillslope.

Climbing the other wall after the crossing there is just one generally undoable switchback. From there, the trail alternately climbs and dips. While a formal trail, it continues the quite narrow aspect and feels social in places adding to the fun. At one point, it passes through a scaffolding tunnel under the one cement road bridge over the canyon. The scaffold appears to be to protect trail users from falling chunks of the bridge, creating a slightly apocalyptic feel.

Not long after, another fork like the last comes up, but this one less marked than the last. Drops off to the left. Again, if you miss it, you'll not go far before hitting a road and realizing you need to double back.

The trail drops back to the creek, which you'll need to cross/ford to get to the trail on the other side. This provides a fast, wide, canyon bottom spin. After a slight left jog at the paved road crossing that comes up, the dirt ends in a playground shortly after. Pick your way through playground and park beyond while respecting other park visitors. Bottom out on Dimond Avenue than hop over to Fruitvale Avenue via MacArthur. From here, it is a two-mile rocket ride to Fruitvale BART. 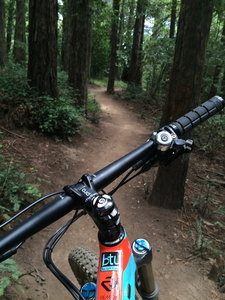 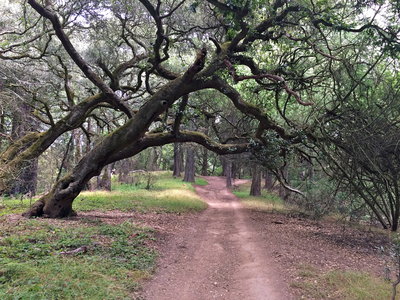 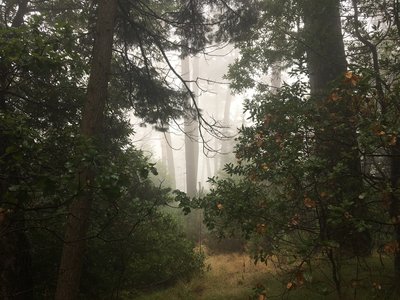 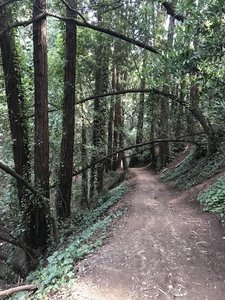 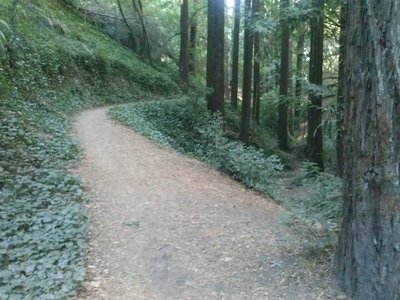 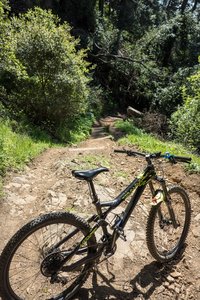 Dark Side of the Briones (auto free)