“A fun loop close to the campground taking you past the Sweetwater Bike Park. ” A loop around Sweetwater Summit Campground with great views of Sweetwater Reservoir. Fun route around Bonita Golf Course and back past Sweetwater Bike Park and back to the campground.

The ride will take you on the east edge of Sweetwater Summit Park with views of the Sweetwater Reservoir on your right. You'll go around the water tower following some singletrack (Sweetwater Trail - East) with some short, technical rocky sections. Hit the fire road downhill (Sweetwater Fire Road (Cardiac Hill)) to the switchbacks which run under the 125.

At the bottom, you'll reach the north side of the Bonita Golf Course. Follow the doublewide track keeping an eye out for other trail users as there is a boarding stable adjacent to the trail. Be aware of flying golf balls!

You'll come to Bonita Road and ride on the trail adjacent to the road which will take you under an overpass and on a bridge across the Sweetwater River. Turn left once you cross the bridge and continue to go around the golf course.

Say hi to more horses in their corrals as you go by. As you approach the end of golf course, you'll go past a gate and continue straight across an access road and head uphill on a doublewide trail. You'll come to the Sweetwater Valley Little League complex. Follow around the outside edge of the ball fields on the County Multi-use Trail and you'll see the Sweetwater Bike Park on your right. Stop and PLAY BIKES!!!! When you are worn out from too much fun, head along the trail and under the 125 overpass following signs back up to Sweetwater Summit Park. If it is a HOT day, make sure to stop at the Splash Park! 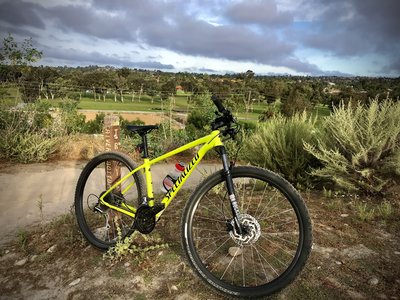 Parking lot to E-Ticket and Back