"The Rimrocker Trail is a newly-connected trail that allows you to enjoy 160 miles of off-pavement travel while experiencing the many different stunning landscapes that connect Montrose, CO to Moab, UT. The roads on the eastern half are graded gravel roads that are two vehicles wide and would easily be traveled in a family sedan," while the Utah section is significantly harder, requiring a capable 4x4...or a mountain bike.

The Rimrocker Trail allows you to connect to other long-distance off-road routes in Colorado and Utah, including the Tabeguache, Paradox, and Kokopelli Trails.

Expect significant elevation changes on this route as you climb up out of valleys and across high plateaus.

There is easily weeks worth of very worthy additional riding--as well as adventuring and touristing--at both ends of this trail. Major attractions around and between Moab, UT and Montrose, CO include Canyonlands, Arches and Black Canyon of the Gunnison National Parks; Dead Horse Point State Park; and flat and/or whitewater sports on the Colorado, Green, Dolores, San Miguel and Gunnison Rivers.

The higher mountain road segments are usually opening by June.

Though it's not an insanely busy trail, this is a multi-use route so expect to share with 4x4s, motos and some OHVs. Avoid holidays and weekends for the best experience.

Dispersed camping is available on National Forest and BLM lands, as well as at four designated campgrounds along the route. Water is an issue, however, so timing your trip to take advantage of snowbanks and/or seasonal run-off in the La Sal Mountains and on the Uncompahgre Plateau is key (or bring a support vehicle).

This ride covers 160 miles, which is far more than can be detailed here. You'll want to download route descriptions and maps from the website at rimrockertrail.org

Climb from Montrose, CO up onto the Uncompahgre Plateau, reaching the route's high point at just under 10,000-ft. Your views to the west begin to open up, with Lone Cone Mountain standing out on the horizon as you begin the gradual descent to Nucla.

If you have a support vehicle, be sure to fill up in town--it's your last chance. From Nucla, you start out riding through a checkerboard of public and private lands. As you travel north and west along the mesa top, there are views of the Uncompahgre Plateau to the east, red rock canyons to the west and the La Sal Mountains farther west in Utah. Although you can't see them, you are paralleling Highway 141 and the San Miguel River.

You pass near Uravan, a defunct uranium and vanadium mining town that is now a Superfund clean-up site. These mines provided the ore for the bombs that ended WWII. In fact, this trail was named after the uranium miners, who were known as "The Rimrockers." If this history really interests you, you can detour to the Monogram Mesa Loop / Bull Canyon Tour EE22 Road that will take you through the Uravan townsite and millsite near the San Miguel River.

Another detour, to the Shamrock (Y-11 Loop or Out N' Back), will take you along the San Miguel River past the Hanging Flume, built to provide water for hydraulic mining, to the confluence of the San Miguel and Dolores Rivers.

A 1.5-mile jog left on the highway leads back to the trail via a bridge across the Dolores River. There are many optional guided detours from the Rimrocker Trail Association in this section, including The Wild Horses of Disappointment Valley, Long Park Mine Tour, Bull Canyon Tour, and Paradox Valley Petroglyph Tour.

Leaving the Dolores River, you climb up onto the Carpenter Ridge with great views of the Lasal Mountains and Paradox Valley, so named because the river cuts across it, rather than running down it. You reach the UT/CO state line shortly after Buckeye Reservoir.

Continue toward the La Sal Mountains on Forest Service roads. These mountains "were named by Spanish missionary and explorer Silvestre Valez de Escalante...His name for them was the Sierra La Sal, or Salt Mountains, being certain that their white tops couldn't possibly be snow in late summer."

You have the option of taking an alternate route to Moab over the mountains by riding up to Geyser Pass (named for an early rancher, not a spurting hot spring, sadly), then down The Whole Enchilada Trail. Or continue on the mapped route past the town of Old La Sal.

Continue toward La Sal Pass, but don't go that high. Contour around the south end of the range, eventually working your way down out of the National Forest and onto BLM roads that lead to the well-maintained Black Ridge Road.

Follow this out to Hwy-191 and take a parallel dirt track toward Moab until you reach the paved Spanish Valley Road. Follow this quiet stretch into town, where a pizza from Antica Forma, local brews, laundromat, bike mechanics, and a night in a hotel with a pool are waiting to cap off your voyage.

There is important western history along this route:

In CO, you pass near significant Native American petroglyph sites, and cross the path of the 1776 Dominguez-Escalante Expedition that named and traveled down the San Miguel and Dolores Rivers. The first Europeans to explore this region, the line of their voyage from Santa Fe to the Salt Lake Valley became the first segment of a route later known as the Old Spanish Trail that you revisit in the UT stretch.

Radium from the Dolores River stocked Marie Curie's lab, and later uranium mining operations here produced the fissile material for the Manhattan Project (and much more). Decades later, the town and mill site of "Uravan was deemed so radioactive that everything in town—houses, streets, even the trees—had to be shredded and buried."

On the UT segment, the notorious Butch Cassidy and the Wild Bunch gang of outlaws used the town of Old La Sal as a hideout in the late 1800s, in addition to their Robbers Roost nest. 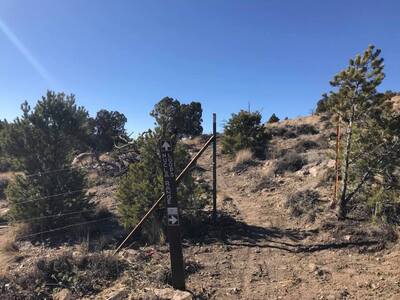 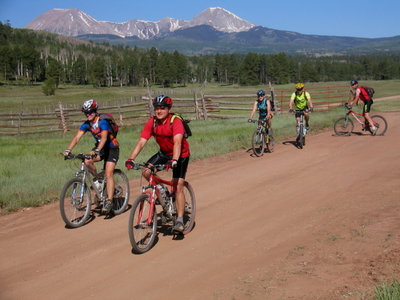 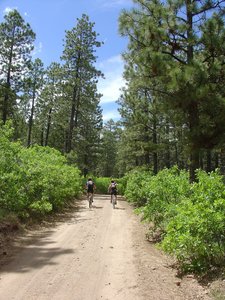 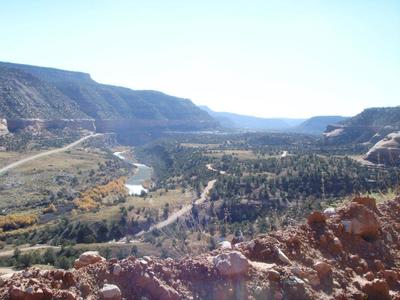 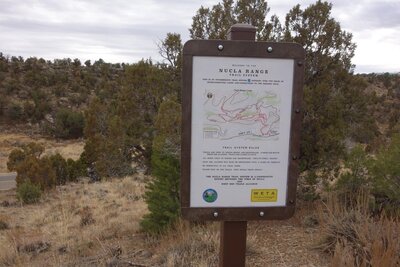 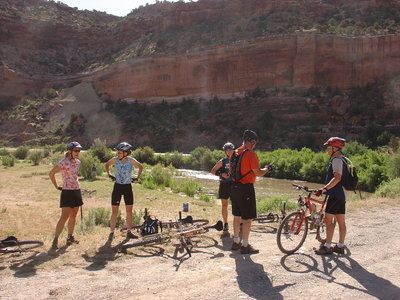