“An epic ride that serves up miles of blissful singletrack and technical diversity. ”

Please note that bikes should stick to trail sections marked with red blazes (aka The Red Trail). Fines are available from any park ranger for being caught on any other trail with a bike (whether you are riding or not!).

In the foothills of the Appalachians, Double Oak Mountain lies at the core of the nearly 10,000 acre Oak Mountain State Park, located just 20 minutes south of Birmingham in Pelham, Alabama. The slopes and valleys of the parallel ridgelines serve up miles of blissful singletrack and technical diversity. The mountain bike trail system, dubbed the Red Trail is comprised of a number of trails offering something for riders of all abilities. This 22-mile loop covers some of the highlights of the trail system as it loops through the park and over the ridge forming Double Oak Mountain.

The trails vary technically and range from smooth singletrack with minimal texture to those that might require a hike-a-bike for some riders. With close access to Birmingham, expect to see riders of all ages and abilities in addition to other trail users like hikers, backpackers, kids, and dogs.

The ride starts out with a good warm up on the Lake Trail, a 4-5 foot wide trail, suitable for all abilities. It offers some of the best views of Double Oak Lake and the park itself.

Seven Bridges (which actually contains 8 bridges) begins after your cross the paved road at the far end of the lake. Seven Bridges is relatively flat and a little narrower than the Lake Trail, but overall it is still pretty easy ride through the woods. There are a couple of optional gap jumps in this segment.

This section ends at the Group Camp Road where you'll turn right and head towards Garrett's Gulch. Garrett's Gulch turns into The Chimneys which turns into Cat Dog Snake. These three trails are progressively more difficult than Seven Bridges. There are more roots, a couple of rock gardens, some narrow tree passages along with with some more optional technical features to be discovered.

Cat Dog Snake ends near the north trailhead off John Findley Drive. From here, you'll take Red Road to begin the 500 ft climb to the top of the ridge. The bottom portion is a grunt with 8 creek crossings made smooth by mortared flagstones placed by the Civilian Conservation Corps. Soon enough, you'll reach the top of the ridge, and then you've got a decision to make.

At the top of the climb, you'll come to some split rail fencing denoting the entrance to Boulder Ridge. Up to now, the route has been relatively easy (technically). Boulder Ridge is an expert trail full of big rocks, tight chokes, obstacles and drops of up to 6 feet that will put your bike handling skills through the toughest of challenges. If you like that sort of thing, enter the split rail fences and have fun. This is the route followed by the GPX). If you're enjoying the cross country character of the ride, continue straight on Red Road.

Roughly a mile later, depending on which route you've chosen, you'll come to another intersection (of Red Road, Boulder Ridge, and West Ridge). The GPX continues on West Ridge (to the left). West Ridge is an awesome technical trail that follows along the rocky top of the ridge, but this trail can be successfully navigated and enjoyed by intermediates. Alternatively, Red Road parallels West Ridge just below the top of the ridge.

At the end of West Ridge, Jekyll 'n Hyde is the next segment, and another highlight of the route. The top section (Jekyll) is just as technical as West Ridge, starting out with tight, rolling singletrack along the cliffs of the old CCC Quarry and transitioning into a half mile descent down a trail littered with a constant flow of roots, rocks, and other features including a three foot rolling drop. More rocks and obstacles await before you whip around the Big Rock into some of the fastest singletrack in the park. The bottom section (Hyde) is a series of white knuckle berms, dips and banked turns mixed in with some short climbs through some beautiful pine and hardwood groves.

After Jekyll 'n Hyde, the ride becomes easier again. First up is Mr Toad's which features some tight turns and a couple of narrow tree passages. This is followed by the easy Family Trail. Finally Rattlesnake Ridge connects you with Lake Trail. Rattlesnake Ridge offers the opportunity for speed, interrupted only by a few roots, narrow passages, and tight twists. Finally, turn right on Lake Trail to get back to the start. 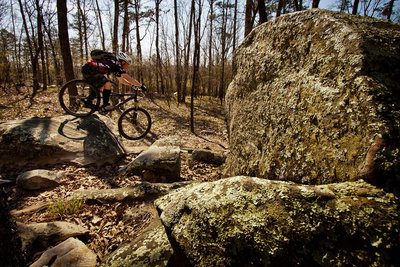 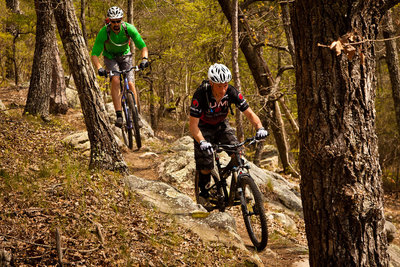 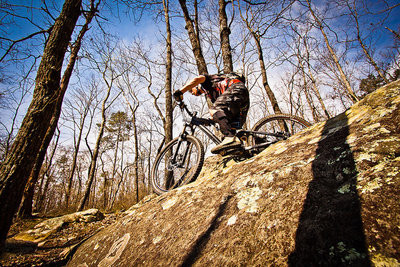 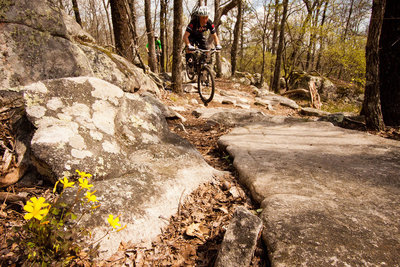 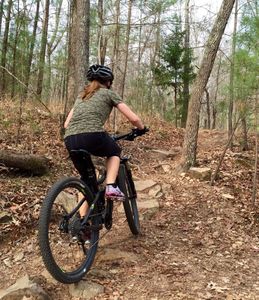 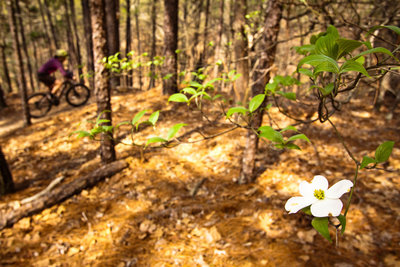 All GUTS, No Glory